This is my attempt to chronicle the progress made around our home when it comes to the yard and my many garden projects.  I started with the overall structure, placement of retaining walls, scraping sod and initial plantings (trees and bushes mainly, part 1).  Then, I continued the planting, filling in and dividing perennials, got it all mulched (that required 20-some odd yards of mulch), added a concrete border to the island and gave you a peek into the scope of our patio projects (part 2).  That's what we'll be taking a look at today.  We've poured quite a bit of concrete around here over the years. 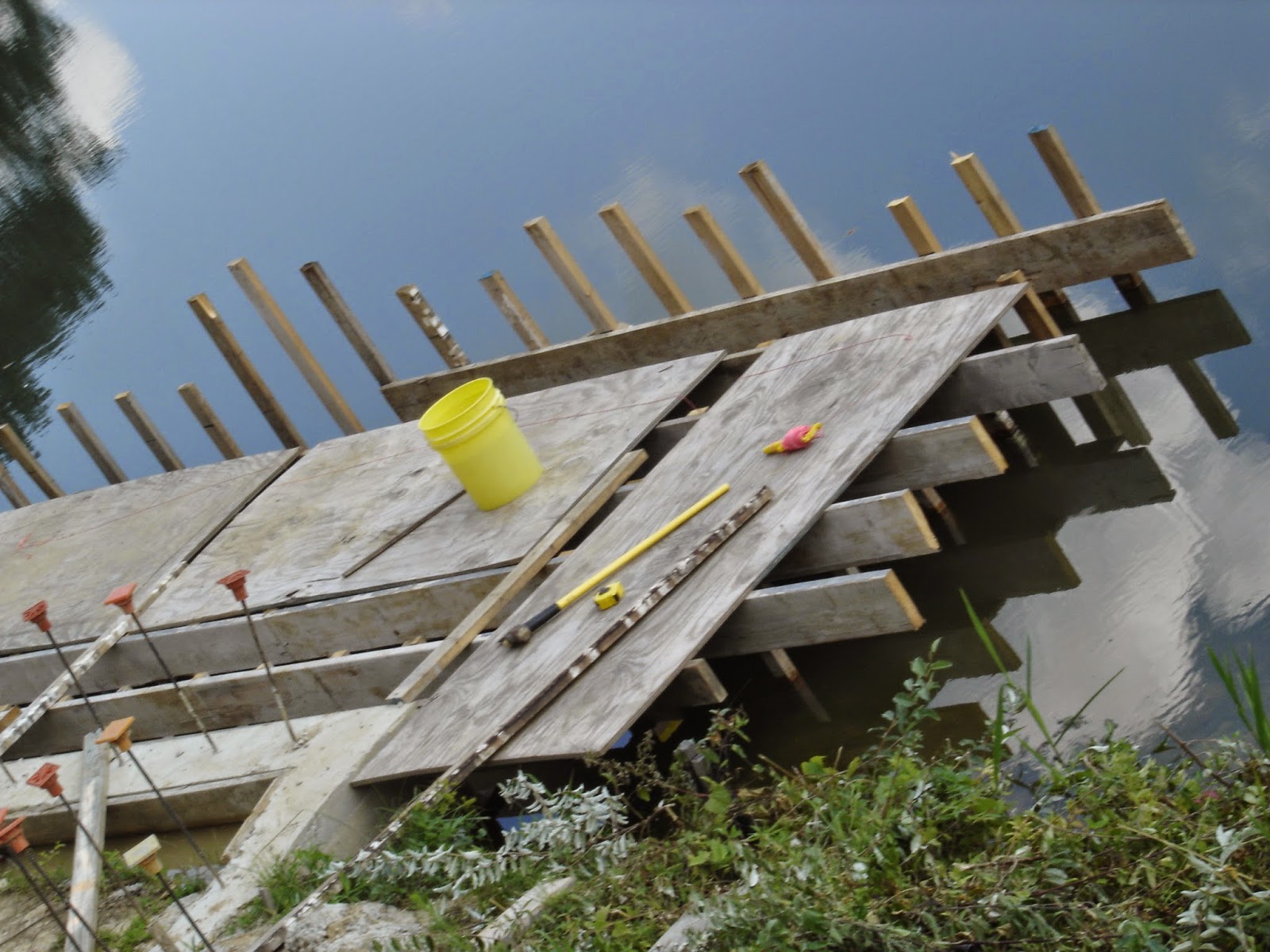 My husband has a great group of guys he gets from work to come over and help out, the kids look forward to it every time, they are quite the comedy act.  Our first pour was the lower patio.  We've worked on this platform over the lake for several weeks.  It requires the boys and I to be in the lake, holding the stakes while my husband stands above with a sledgehammer, pounding them into the lake bottom.  Then, it's switcheroo time and hubby gets his turn in the lake while we hold the crossbeam in place from above and he screws it in.  Yep, loads of fun.  Our platform is nearly done in this picture.

My husband is a planner, that's for sure.  See all the trenches?  That's for the possibility of ever needing them.  One is for a gas line into the firepit in the center, just in case we ever decide to do that.  The other?  I can't remember but I'm sure he does.  It might be drainage.  In the far back corner we have a drainage pit for an eventual outdoor kitchen up above.  When we winterize it, it'll drain into the pit and then down into the lake?  I could be wrong on that one though.  Suffice it to say, my hubby is prepared for all eventualities. 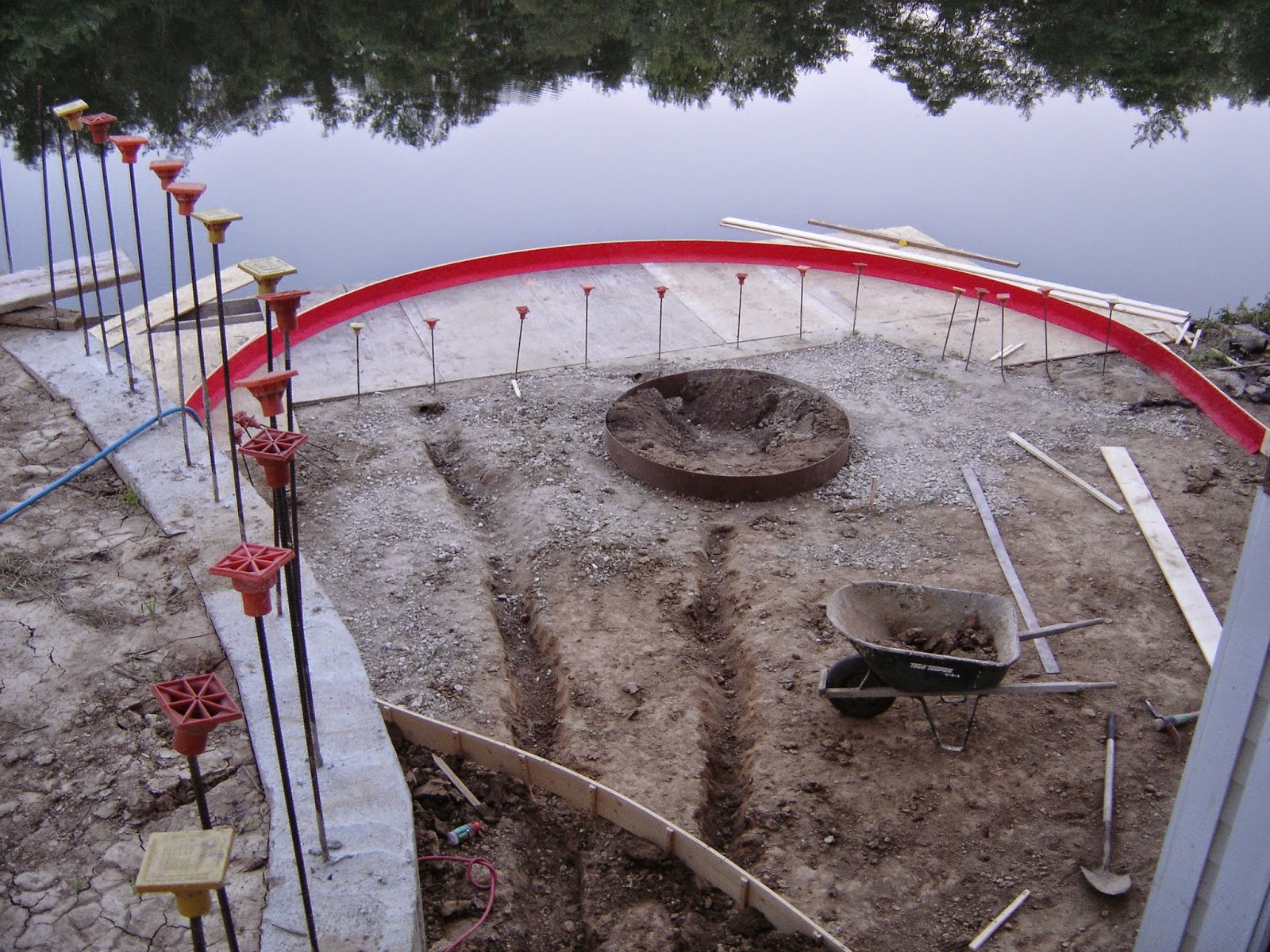 Here it is all ready to go.  If you look closely at the picture where the wood meets the dirt you'll see rebar bent back towards the house, that ties a footing, which we poured earlier and isn't shown, to the patio, holding it all together. 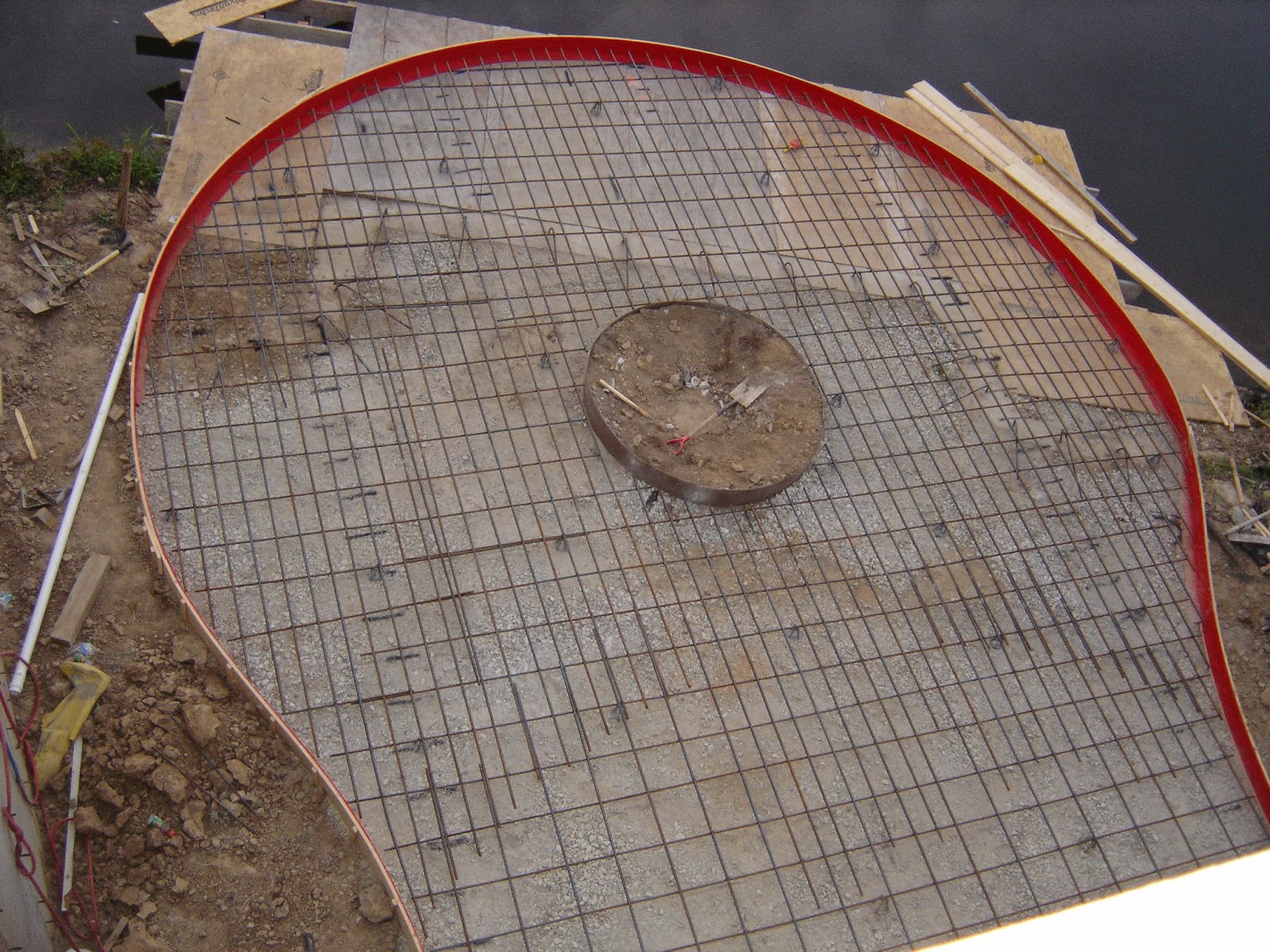 Testing out the wall we poured, I was a little nervous.  This was one of those pours where we were just waiting for something to go wrong.  As an extra precaution my husband used cables to help support the wood platform, if the weight of the concrete made it want to shift, hopefully the cables would help keep it in place.  I was sure somebody would end up in the lake.  Amazingly, it was an uneventful pour, all went smoothly. 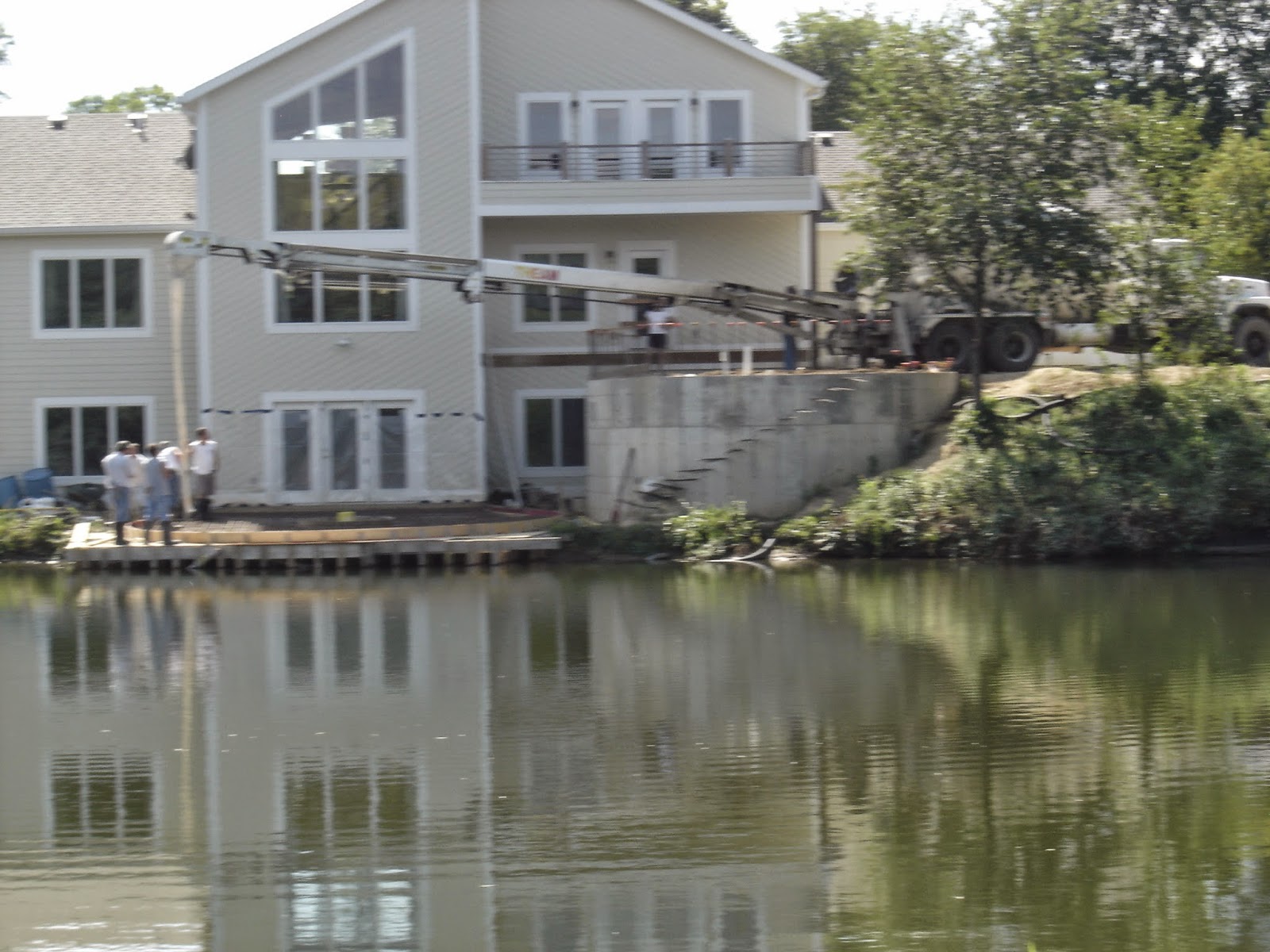 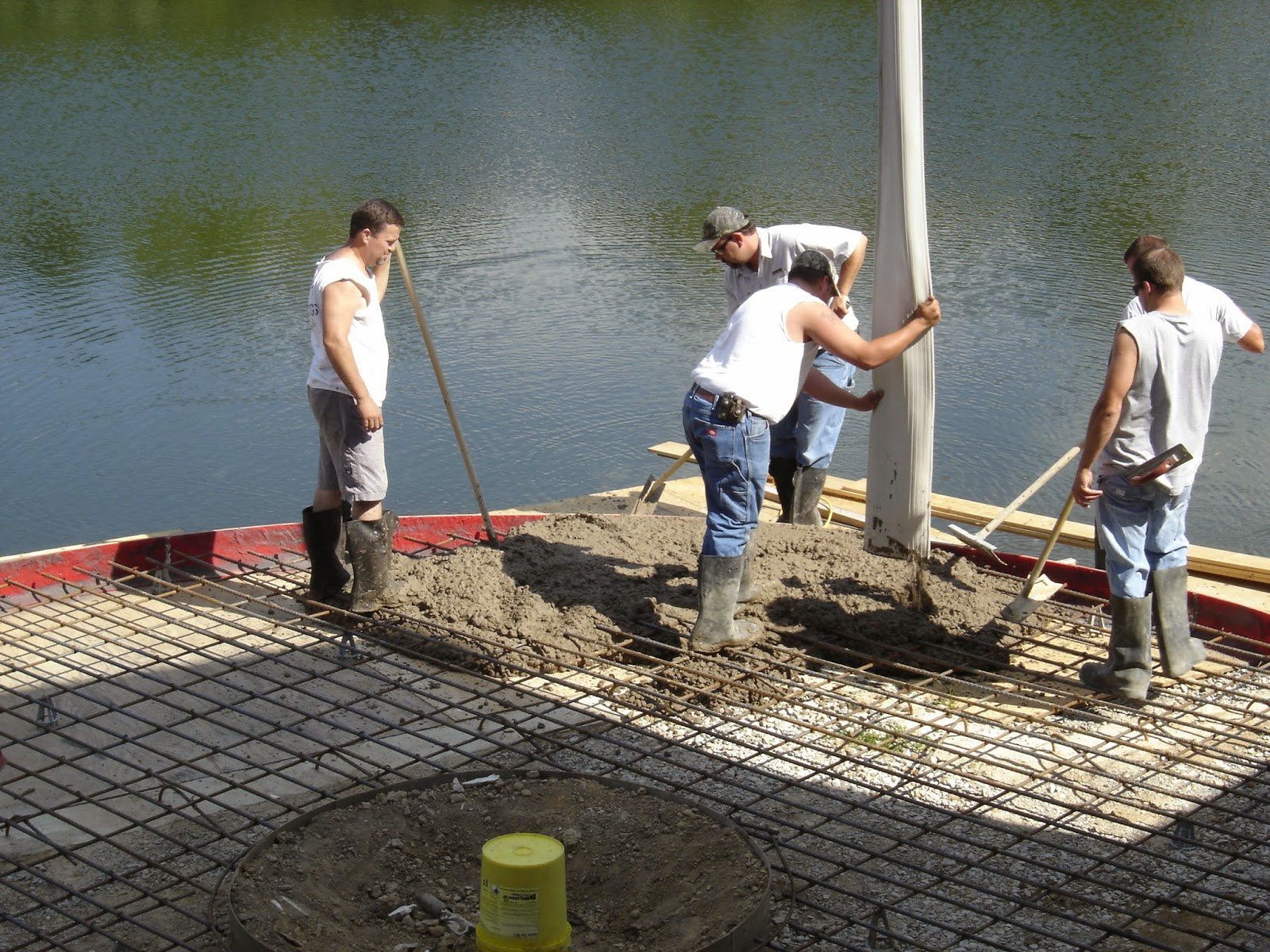 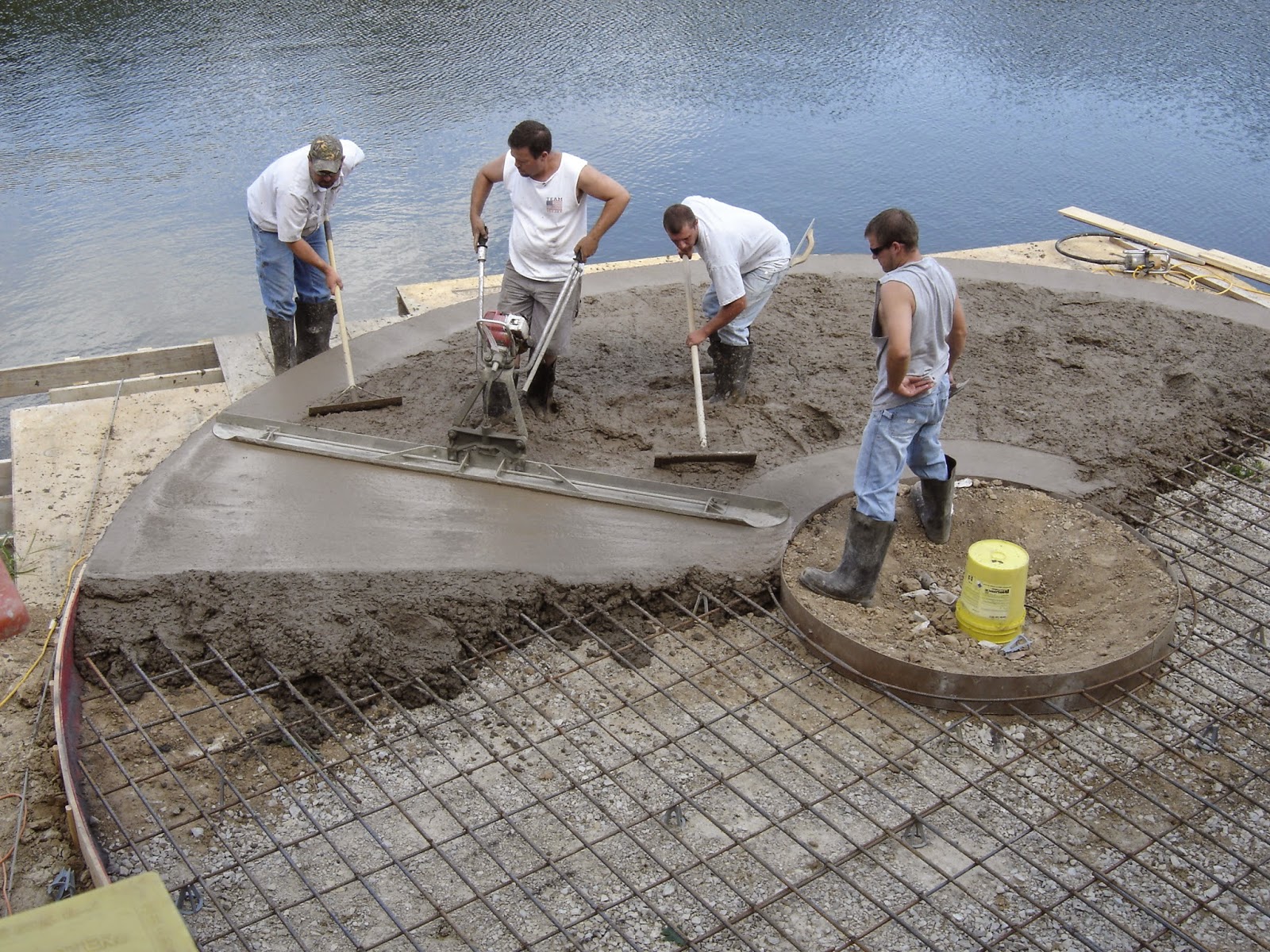 Here they are getting it stamped. 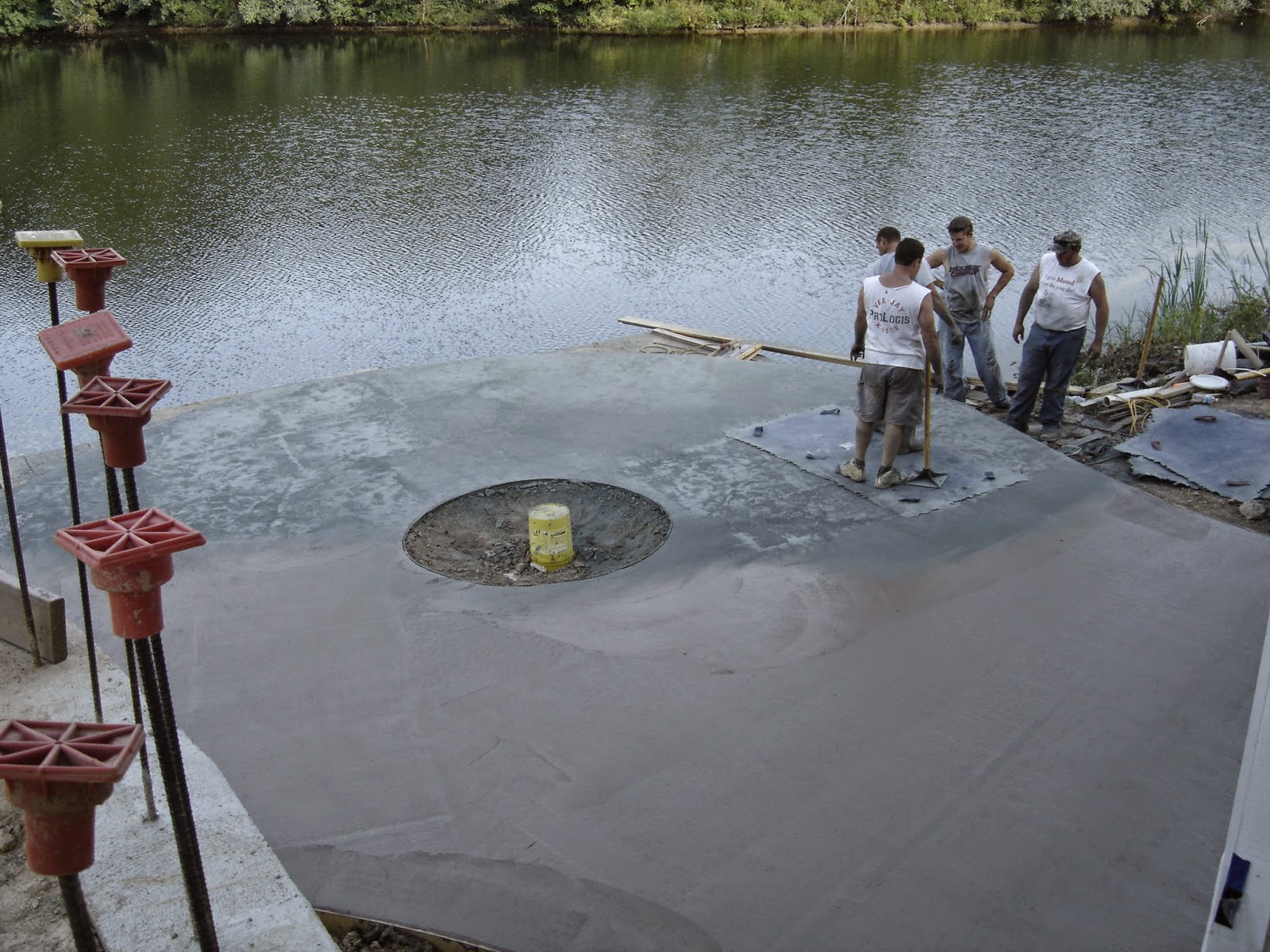 Here's the finish.  It turned out great.  Now, onto the next project! 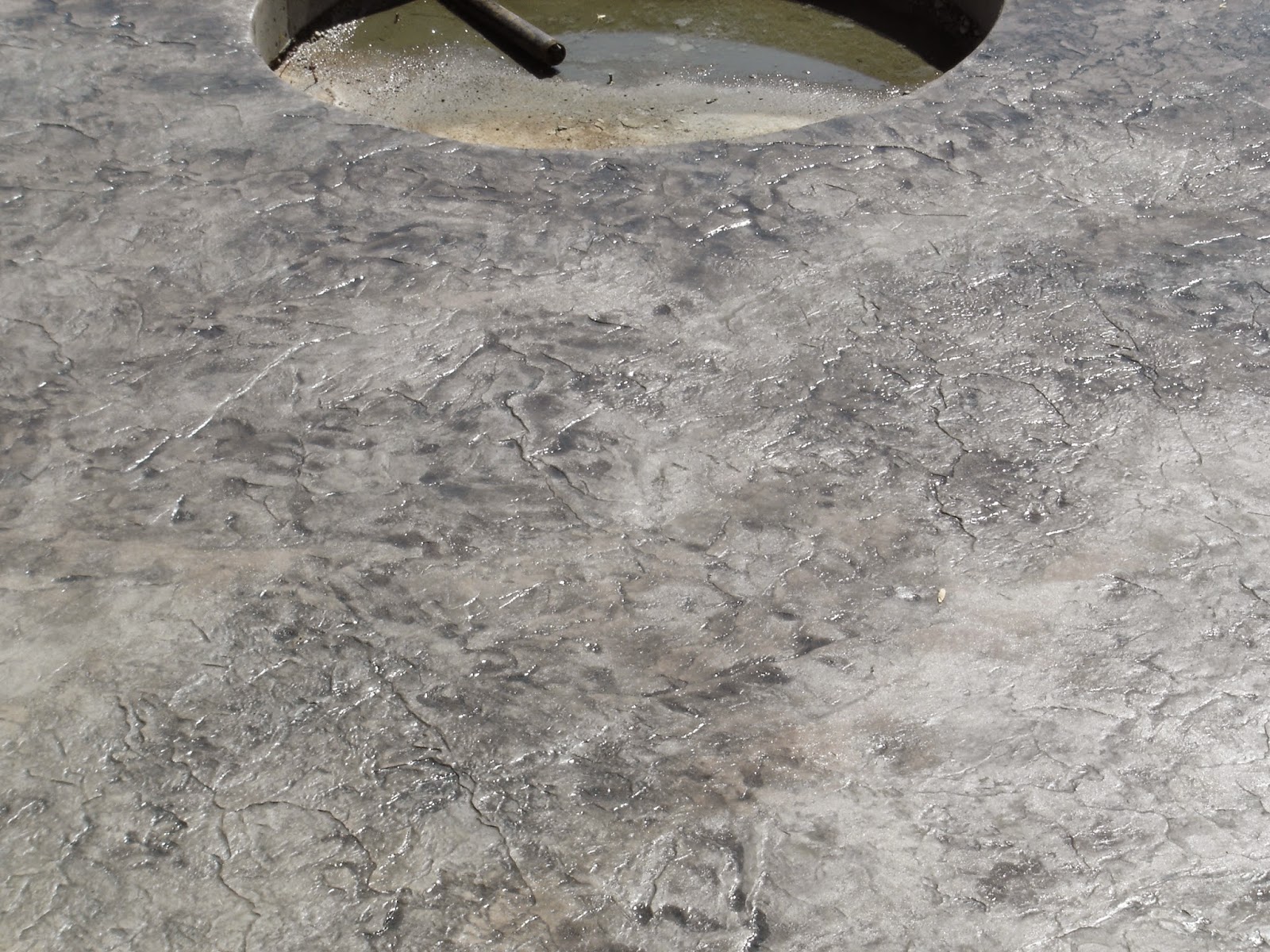 Which I believe was the floating staircase to connect the lower and upper patios.  Somehow during these next couple pours we also did the firepit.  (I can't find any framed pictures of that, only a finished product, if memory serves we did two small pours to get it done).  Here's a looksy at that.  We did the same stamp on the hearth area as the patio. 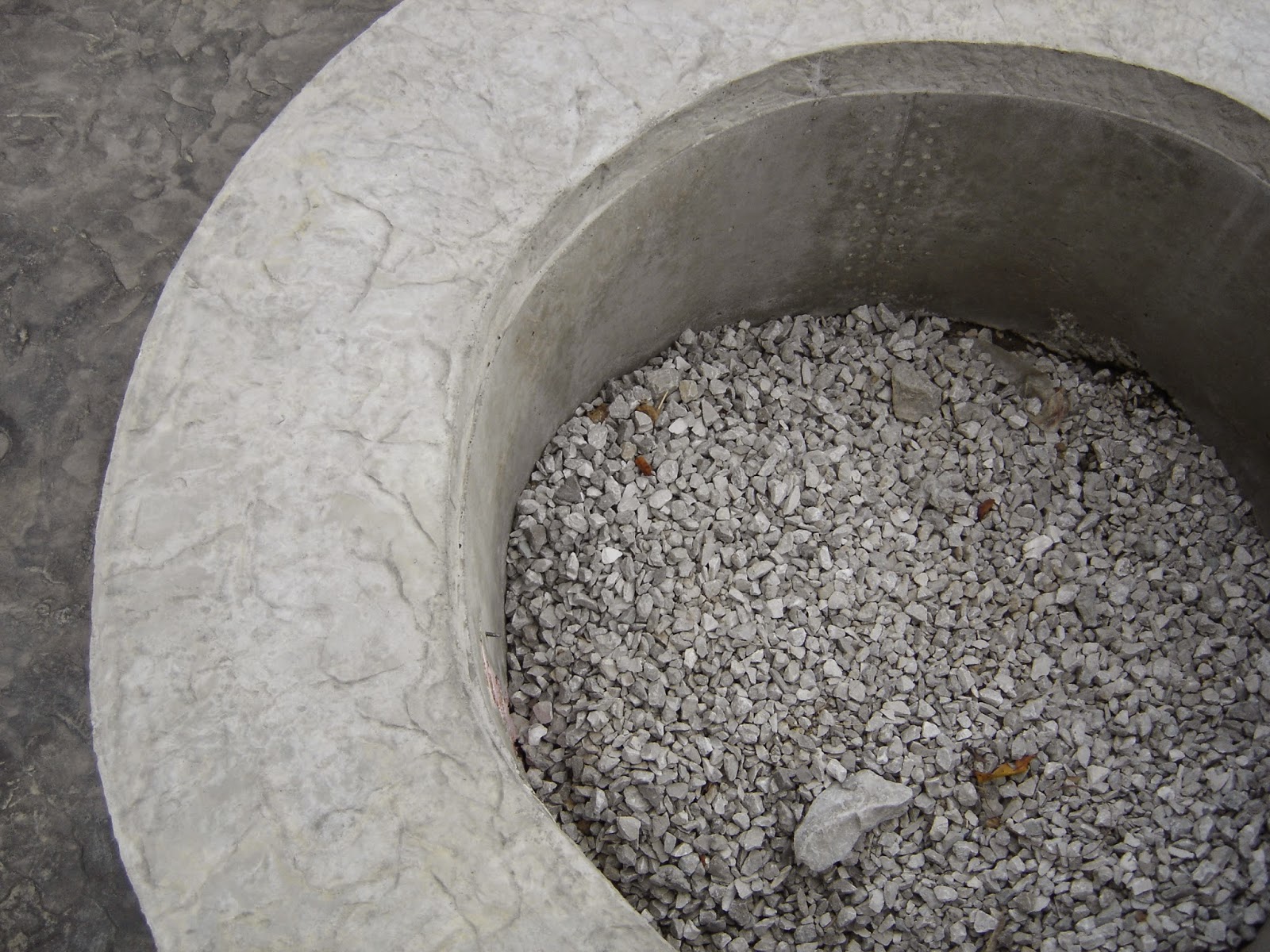 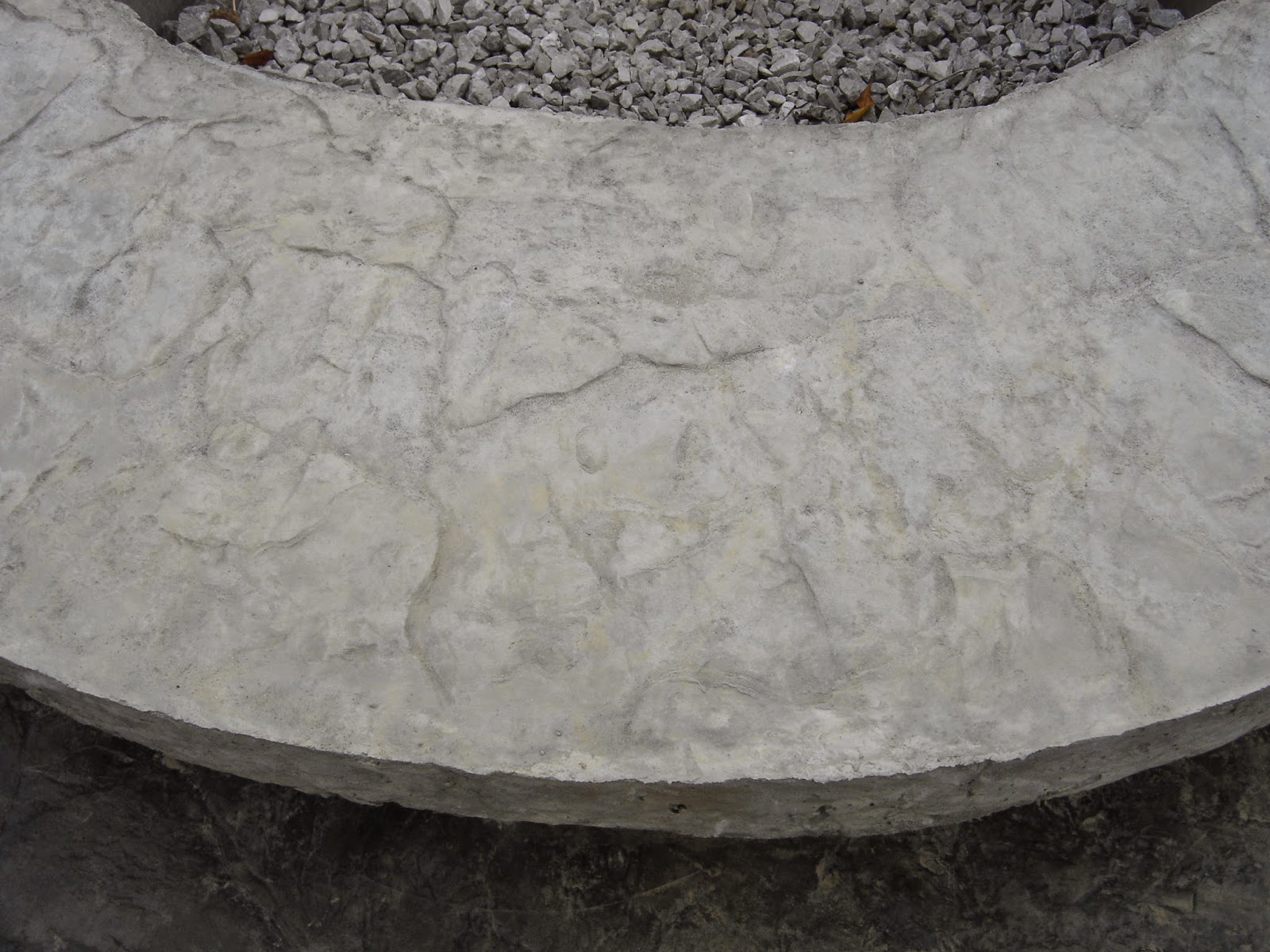 Of course it's not done yet, I'll be adding carved vertical concrete to look like stacked stone, eventually, that took another couple years to get done though. 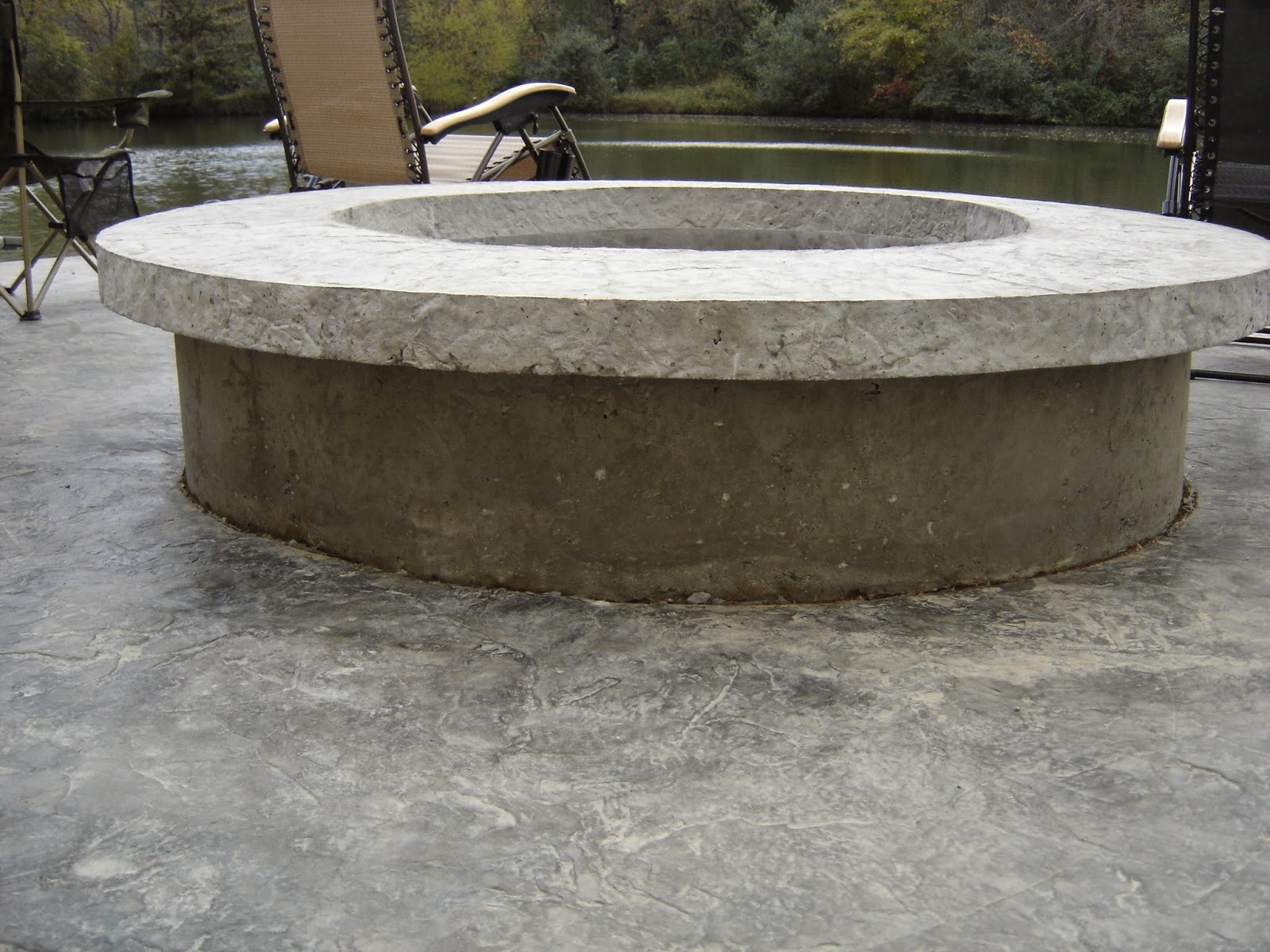 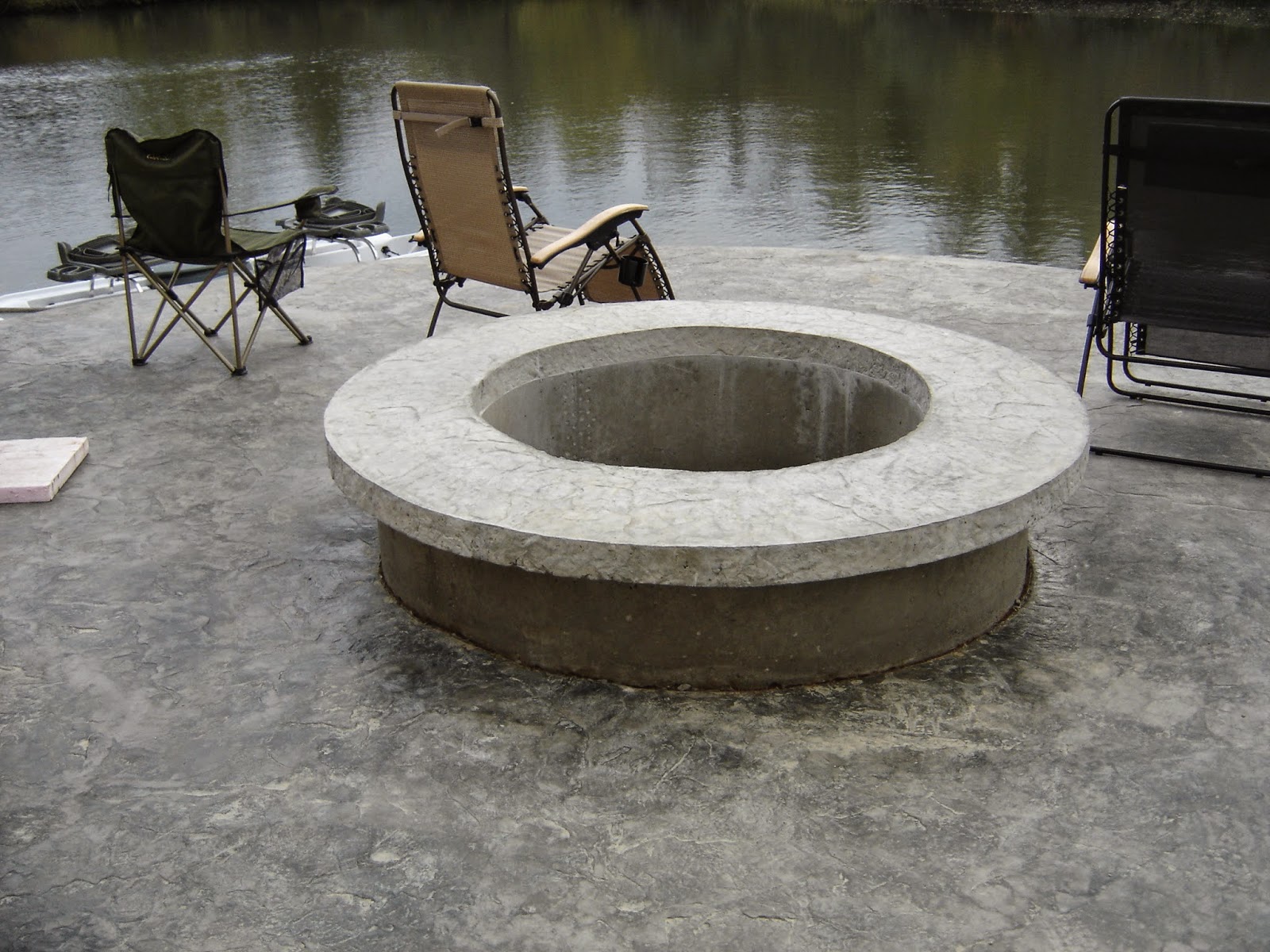 The staircase is one of my favorite things, we were looking through a magazine and saw a treehouse with cantilevered stairs winding up in a spiral and knew we wanted to try that here.  When we poured the retaining wall (our first ever wall pour) we added all the rebar necessary to cantilever the steps.  We did two pours to get the staircase done, alternating steps.  So happy with the finished results. 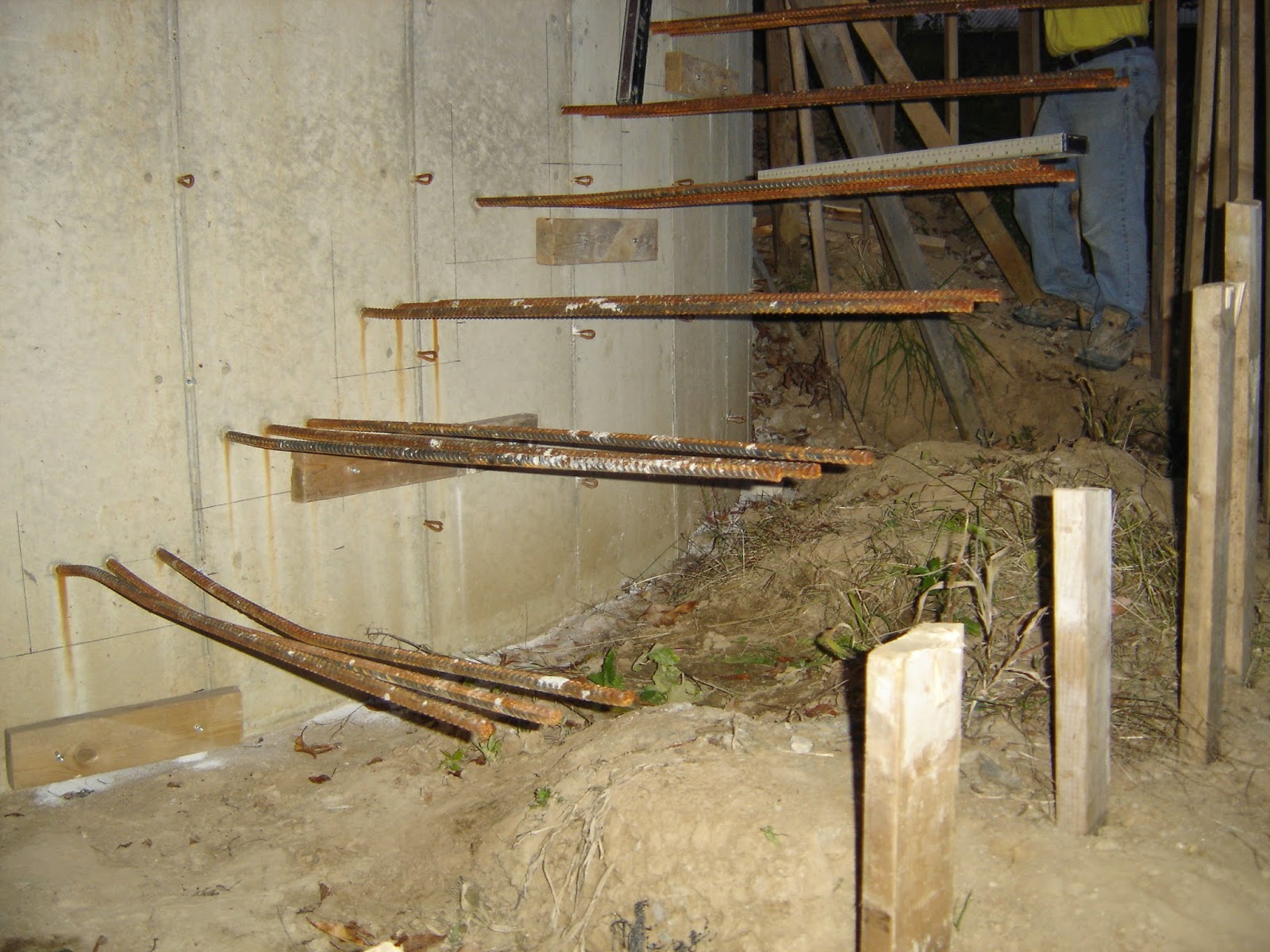 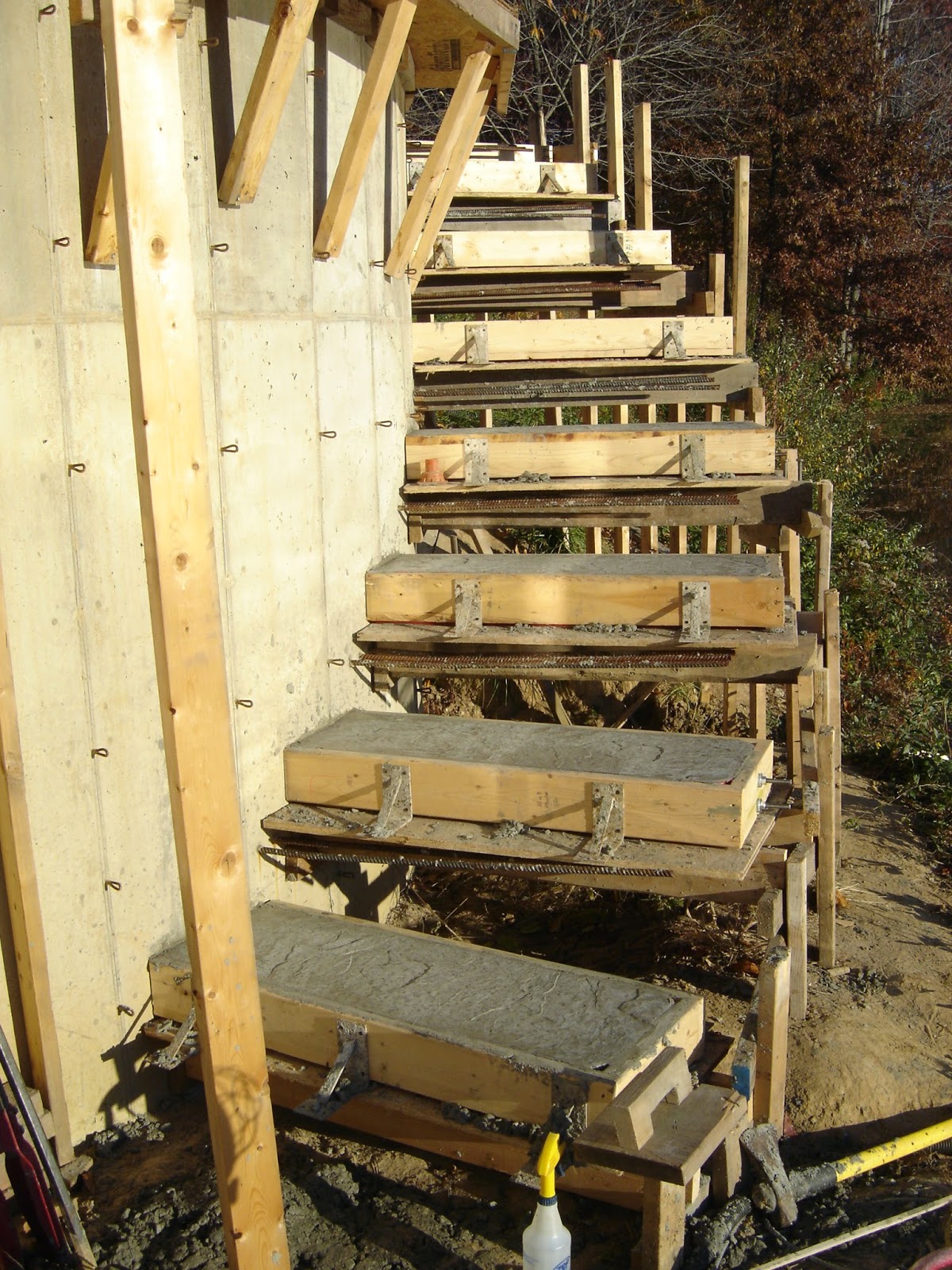 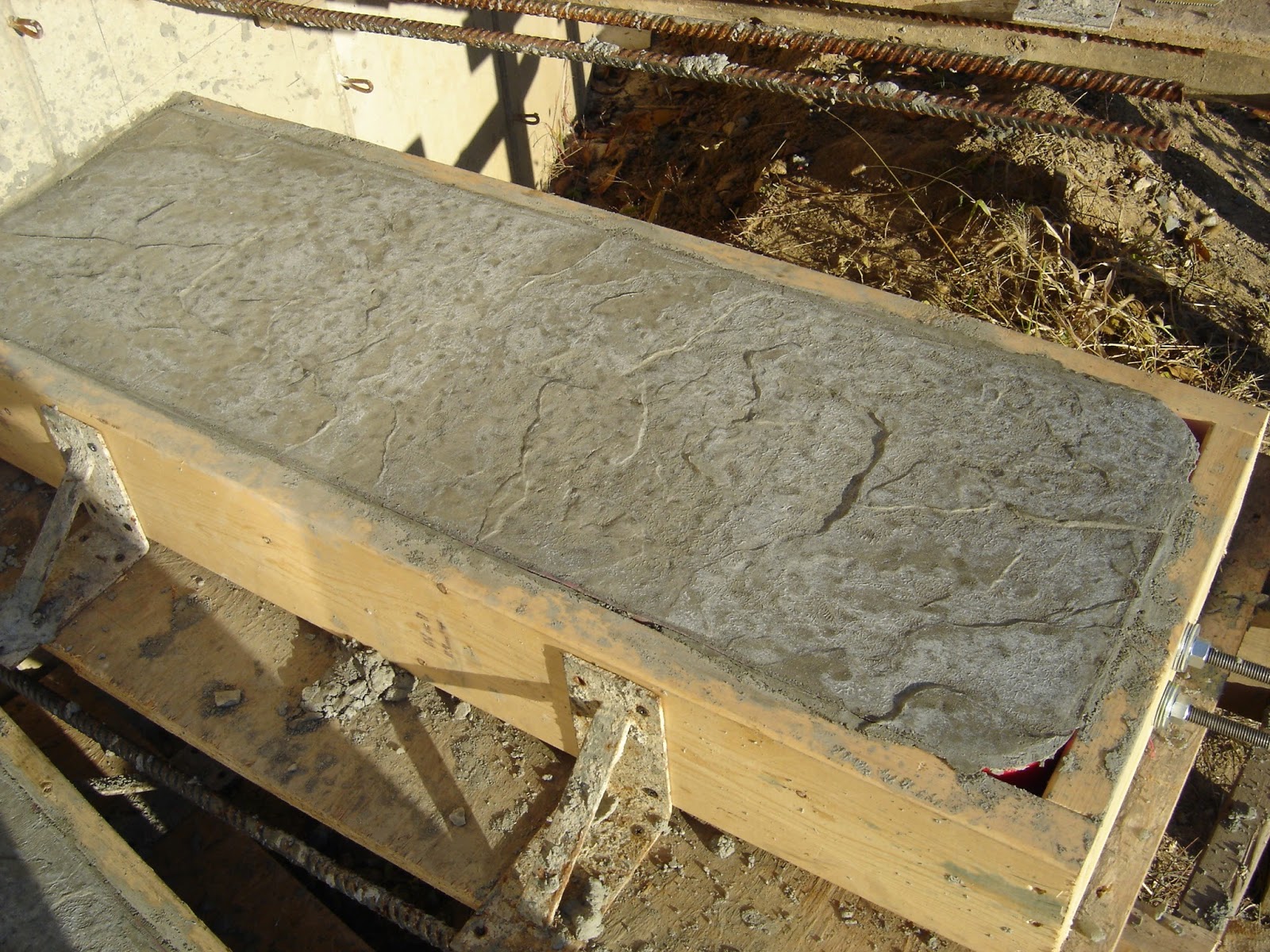 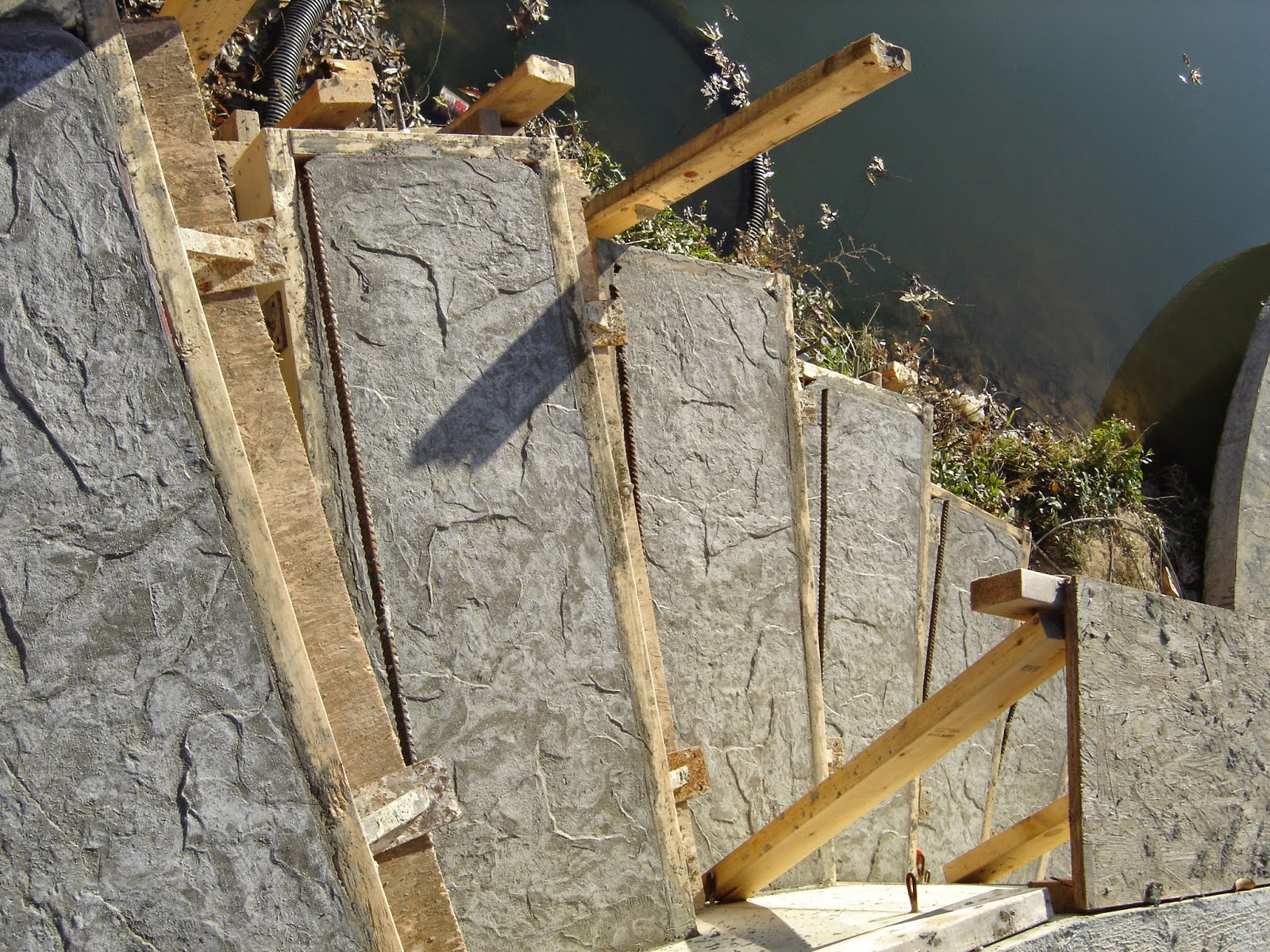 I stained the stairs and the firepit hearth to match using the same technique as I used on the front island border shown in part 2, just different colors. 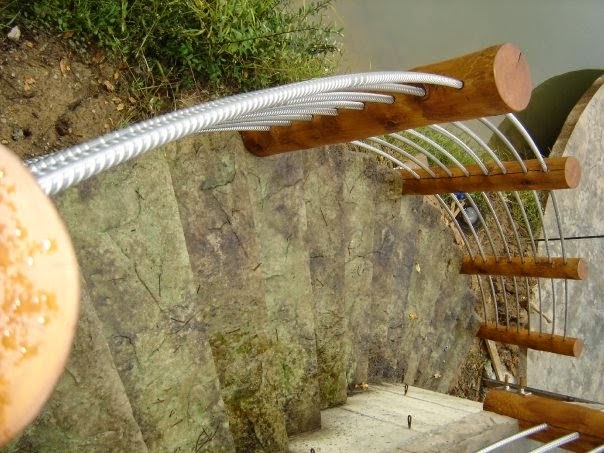 I still have one more patio to show you but I"ll save it for next time.  I also got some landscaping done around the upper patio to finish off the back of the house (well, "finish" is really not the right term, will we ever be "finished"?).  Then, it's on to the vertical carved concrete work in the back and a new, humongous flowerbed I added out front.  Can't wait for spring cause that's where I plan to spend some time and get some projects done this season.  It's going to be a great year!

Posted by thechirpingfrog at 6:32 AM