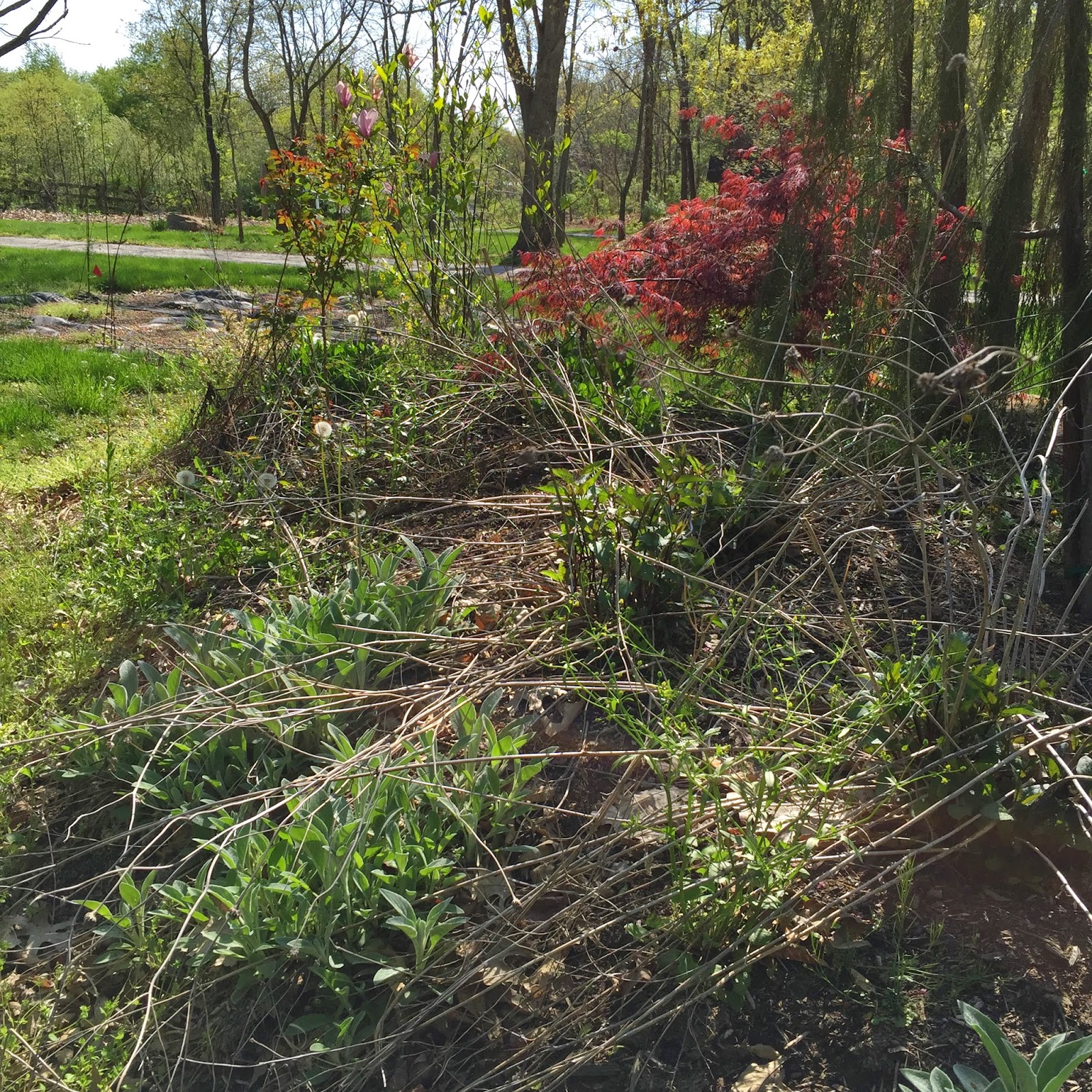 I spent a couple days this past week getting the rest of my flowerbeds cleaned out.  All I had left were the three berms out front and man, were they a mess!  After many wheelbarrows to the burn pile I am now ready for the fun stuff to begin!

Here's a quick look at my mess and how much better it looks now.

I'm embarrassed by how awful my flowerbeds look and how long it took me to get them cleared out.  Usually I get out there during a nice day really early in the season, not this year.

My husband called this my "weed patch" and he's not kidding.  Look at all them dandelions, they're nearly choking out my poor little Weigela Bush. 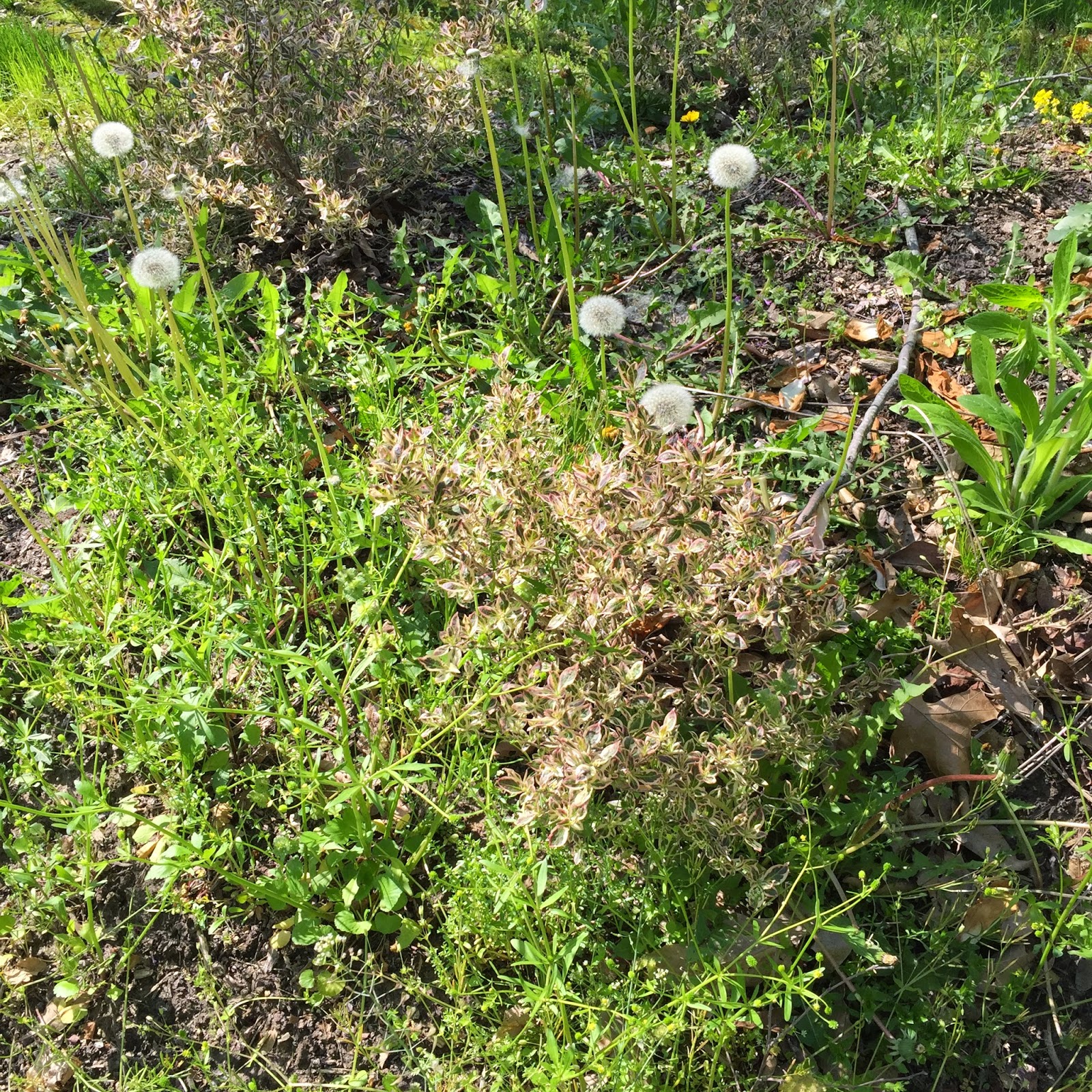 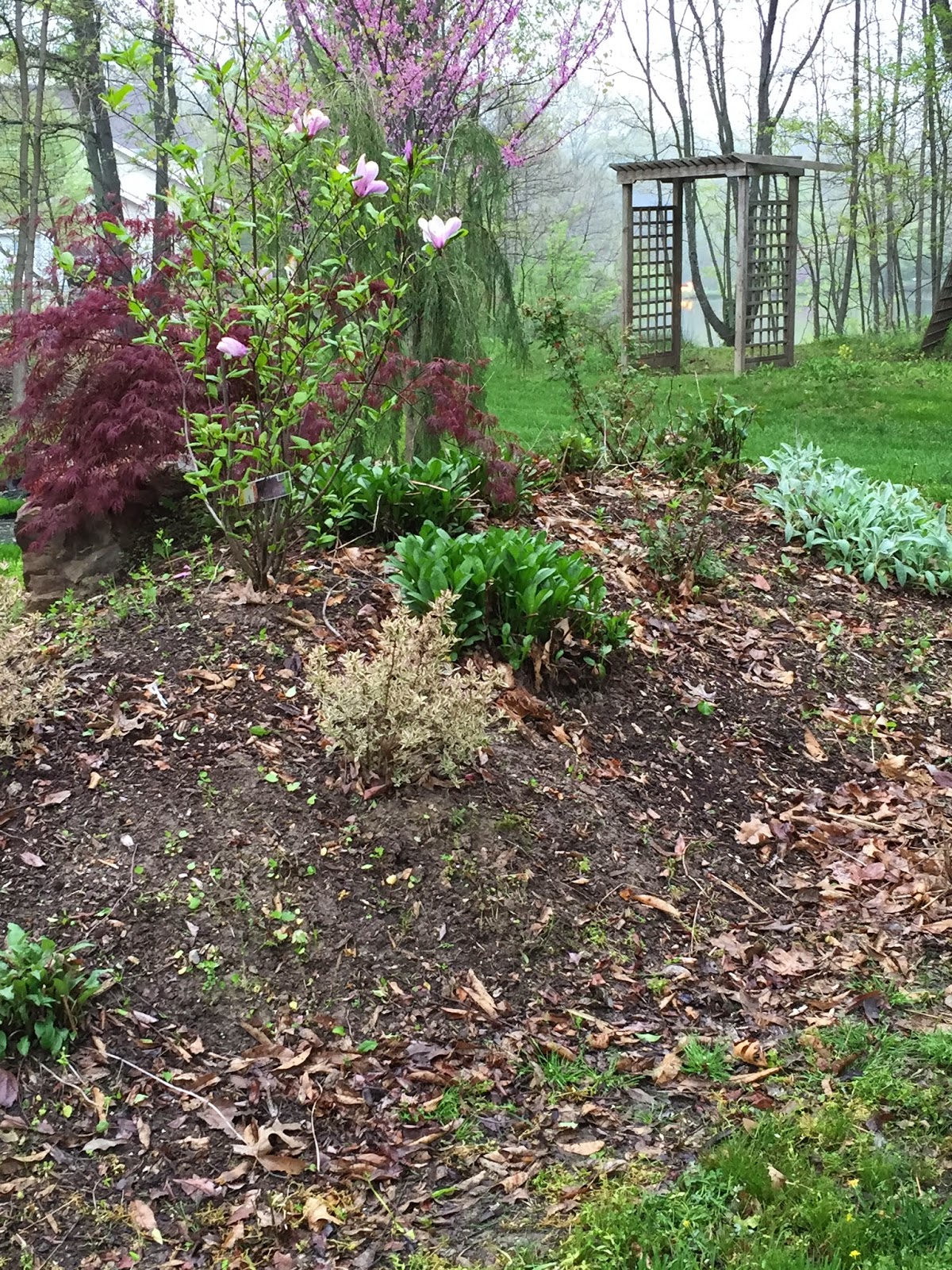 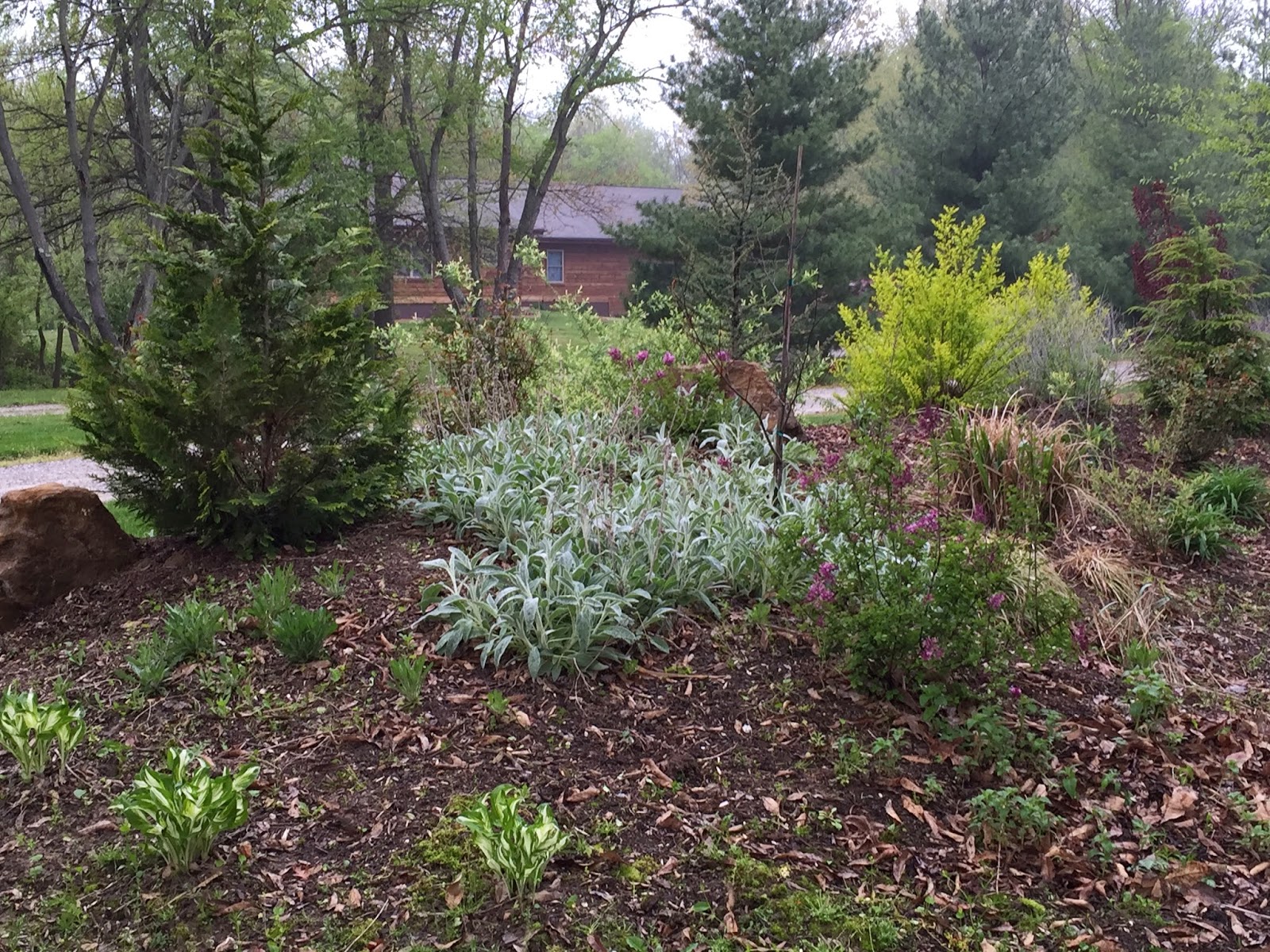 Now that I've got the flowerbeds under control its time to move on to the fun projects.  Here's what's next in line.

First:  A couple weeks ago the electric company was cutting back trees in our area so we hit them up to dump a load of mulch.  I can't remember exactly how many yards of mulch the truck carries but it's in the double digit range, 13 sticks in my head for some reason.

Did you know your local municipality probably gets loads of the stuff from the electric company and its FREE to the taker?  We lucked out to get it delivered but normally you will need to pick up and on given days they have a loader to load you up.

Now, before you get too excited I'd be careful using it in your flowerbeds.  Honestly, I wouldn't.  It hasn't been treated and you never know what kind of bugs/diseases are in the trees that have been cut.  I won't be using any of it in flowerbeds but I do have another project in mind to add pathways around the lake so this should give me a nice start. 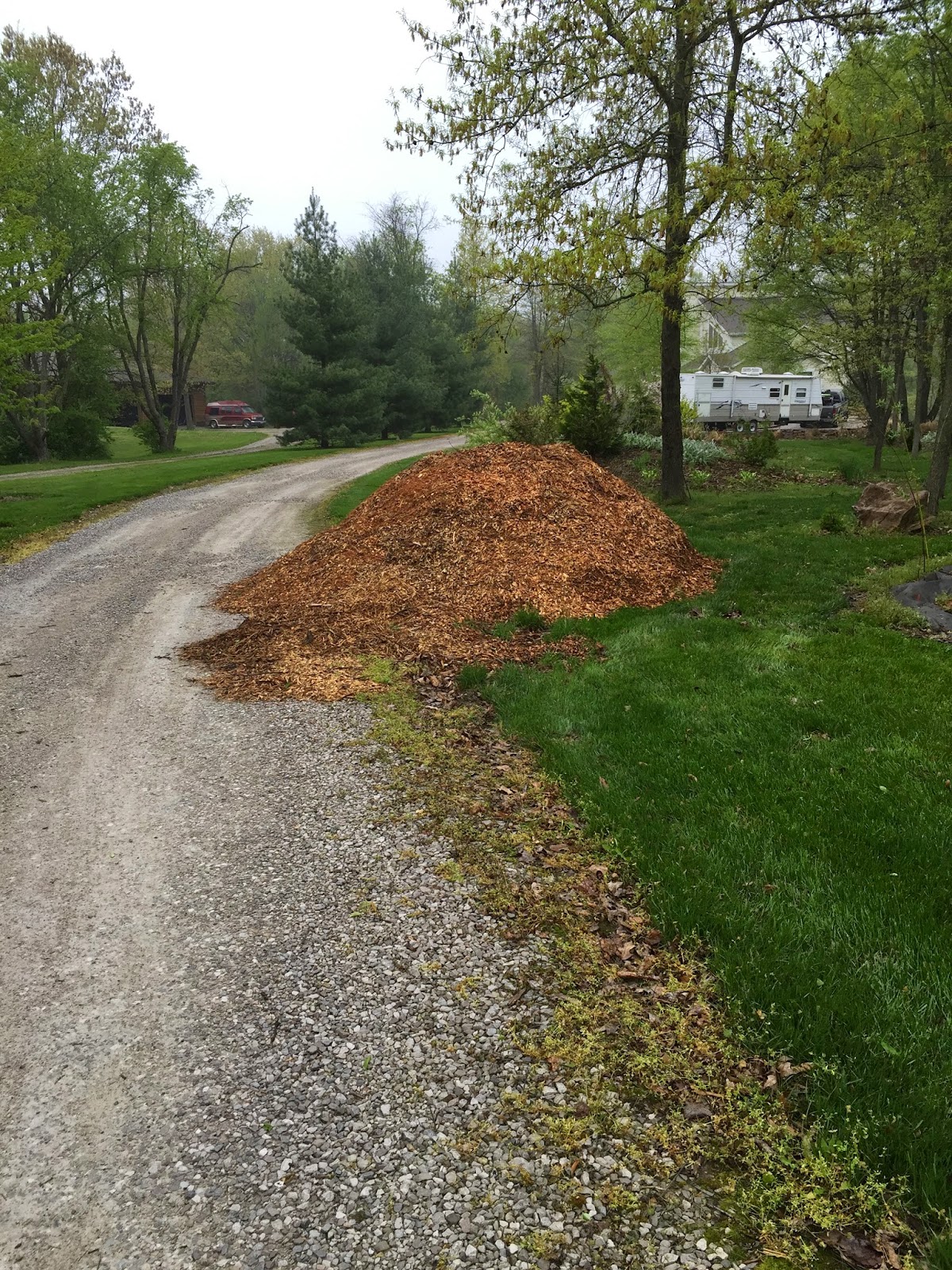 Second:  Another project I'd like to get moving on this spring is a pathway between the berms in the very front of our yard.  There is a large circle right behind where I'm taking the picture that will eventually be a willow structure (it's in the works, slowly) and then I want a path leading to a second, smaller circle (the Arb's are a part of it's border).  I haven't marked it yet but I need to get it laid out and start digging.   Here's a quick peek into a little more detail on what I'm thinking for the walkway, hoping to start prepwork this week.  Fun, fun! 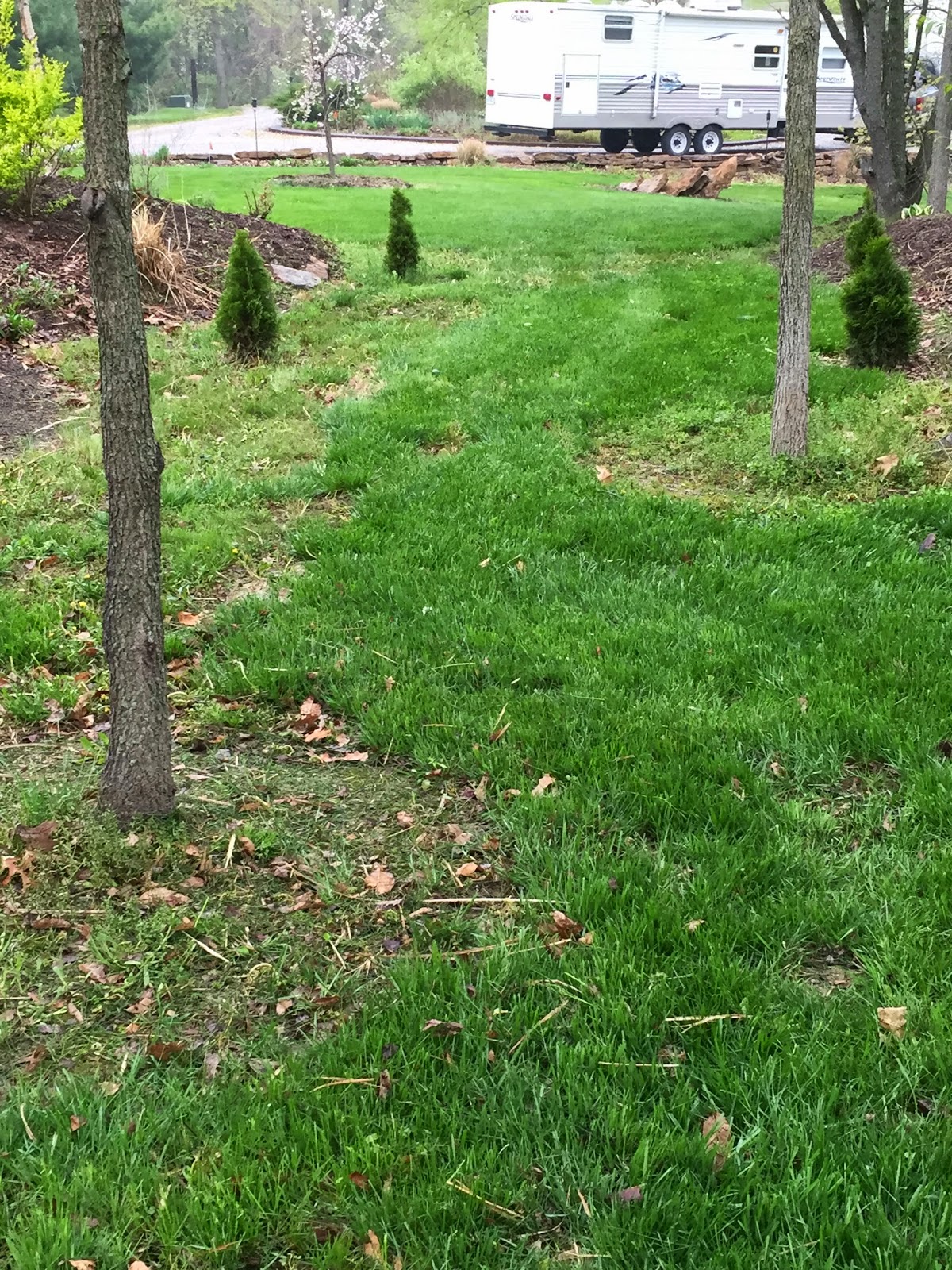 I also have plans for a "hanging garden" out here with some planters I am hoping to get started on next week.
Tomorrow I'd like to share with you some of my favorite perennials.  Every year at "clean-up" time I fall in love with them all over again.

Posted by thechirpingfrog at 4:40 AM