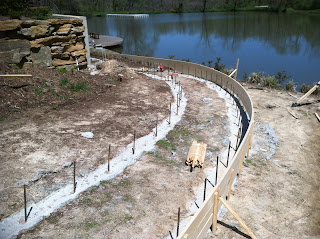 First thing was to dig the footings, don't want all our hard work to go sliding into the lake someday.  The boys dug about half and then hubby took over and finished it up.

Here the footings are poured with rebar extending to attach to the curb and the framing of the curb has begun. 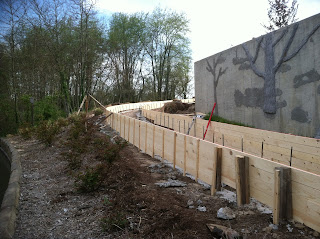 The outer framing is done, the wall portion anyhow.  It looks way too tall.  I questioned that but there's no way around it.  The slope from the drive to the patio is quite large.  To keep an even, comfortable slope with no steps that's the way it had to be.  Our goal is for it to be wheel chair accessible.  Once the rose bushes grow up it'll be disguised and hardly noticable.   You can also see the beginning of my next wall in the background.
The picture below shows our attempt at adding some wood texture to the concrete as well.  We used the house siding (it's concrete board) and then hubby added some small pieces of melamine (the tag says eucaboard) to add spacing between them.  This is a trial and error type thing.  We've not done this before.  We could have lots of problems when it comes time to remove the framing, we've wiped all forming down with form oil in the hopes that'll help us out.  We shall see! 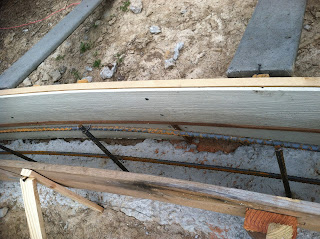 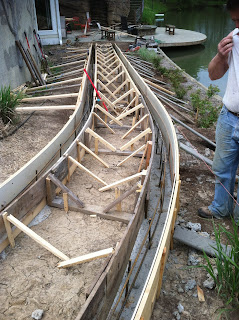 This is pour day.  Between the curbs will be filled with dirt/rock, I don't remember what he said for sure. 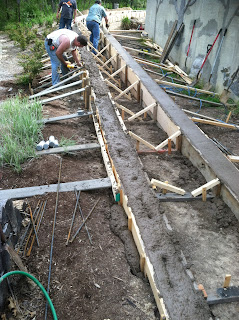 We did have some problems with bulging, my son put some of this in and the stakes are not in anything that's supporting them (he put them in above the seawall where there's minimal dirt vs. a little bit further in where they'd actually catch something that'd give some substantial support).  What's that old saying, "if you want smething done right you need to just do it yourself", or at least monitor their work and make sure it's done right.  It won't be noticable when all is said and done but J was annoyed that it's not "perfect". 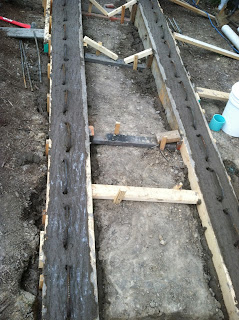 These little pieces of rebar sink in nearly 10" and stick up a couple so that they'll enbed in the planks that make up the actual walking surface.  The planks will hang over the edge a couple inches on each side.  On the straightaway (the part pictured) they'll be 12" wide by 3.5" thick with spacing between. 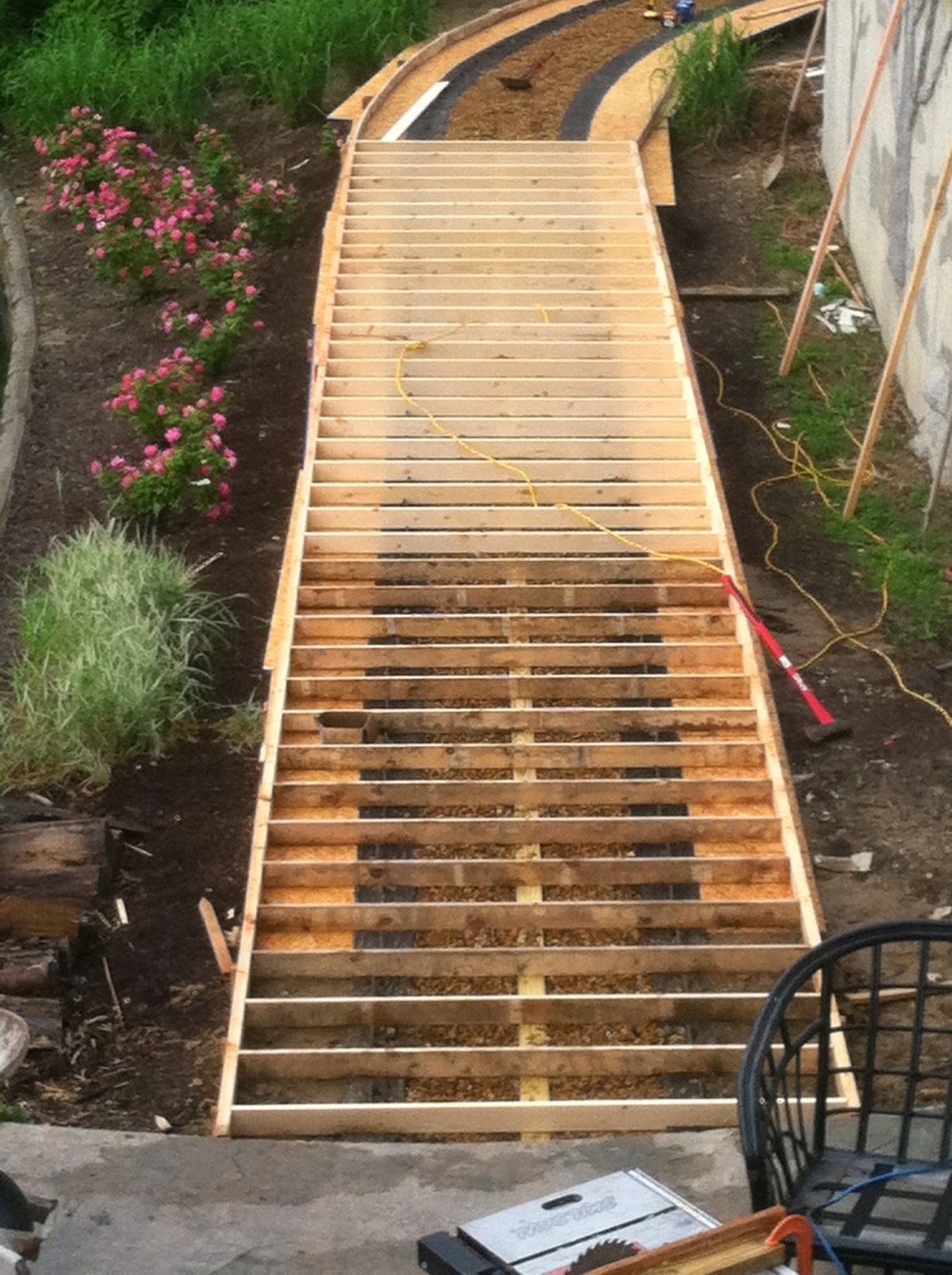 2 Stages down (footing and curb), Stage 3, Planks. We poured it in two pieces.  This was the first half.  You can see the curb and rock underneath and then it was framed out so that the planks will hang over the edge of the curb. 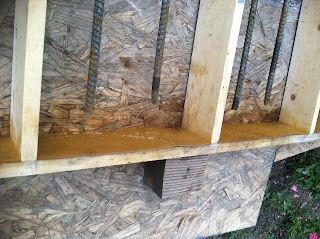 There are two pieces of rebar in each plank that are tied to a u-shaped piece sticking up from the curb, it's not going anywhere.  You can see our homemade form liners on the edge.  We needed 86 pieces in order to pour half the planks.  We used a stamp we had (a tree slice) with leftover concrete from the curb pour as a template.   Lots of prep work involved but pretty neat stuff (some type of urethane liquid rubber, mix two parts together and smooth it into your template.  Sets up overnight, we had to do it multiple times). 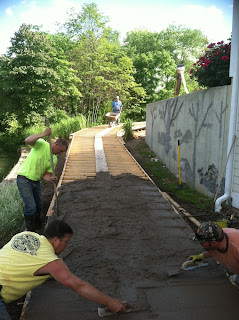 This is the first pour, after an initial "hiccup" all went smoothly! 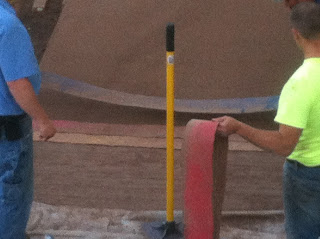 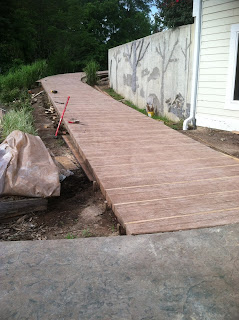 Our initial plan was to let the wood separators rot out.  We really wanted the look of a national park where the wood walkways  have spacing between them.  Now that's it's done Jason's wheels are spinning trying to come up with a way to remove the wood.  He wants it outta there!

I cannot even tell you how many times I heard, "there's gotta be an easier way to do this, I just don't know what it is!"

All he could come up with was to chainsaw out the center of the spacer (1x4) and then use the concrete saw to slice it even further and then pull the pieces out.  Worked like a charm, backbreaking though, and time consuming, he was determined to get the wood out! 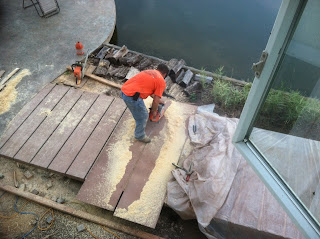 It took a lot longer than we expected.  By the end of this project we were both really feeling our age.  Old and tired!
Next time, the completion of my second retaining wall and more flowers.  I do believe we've worked our way through all our many projects to date.  Hoping to start some new ones soon.

Posted by thechirpingfrog at 4:39 AM