One of My Favorites.... Japanese Dappled Willow 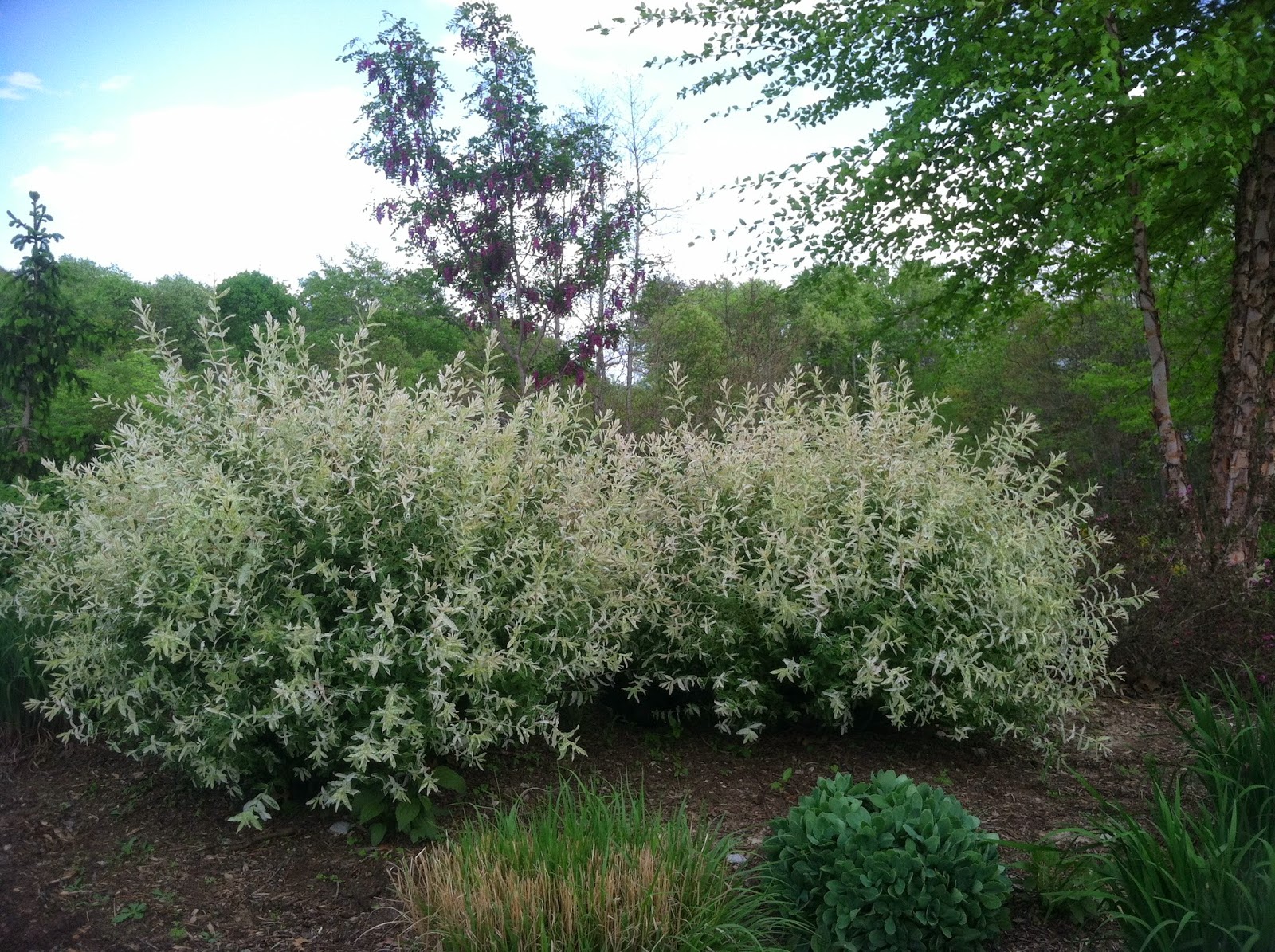 Today I would like to share with you my experience with a wonderful bush called Japanese Dappled Willow, one of my absolute favorites.

These bushes don't really flower, per se, although the tag usually describes a "flower" but they do have a very interesting, lovely new growth pattern with touches of pink that makes them stand out beautifully in any landscaping.

And boy, once you get them established you can't hardly kill them.  They can be tricky at first, but man, are they hardy.  I like to keep them about the size you see in this first picture.  That's easier said than done!  They grow like weeds and easily hit 8' tall multiple times throughout the growing season (I'm in Illinois so that's just April-October, or so).  I cut them back repeatedly to try and corral them.  If you're not up for some maintenance then this is not the bush for you.  If you're willing to give them a little TLC, then you've got yourself a gorgeous, eye-catching, hardy bush that'll lighten your landscaping for years to come. 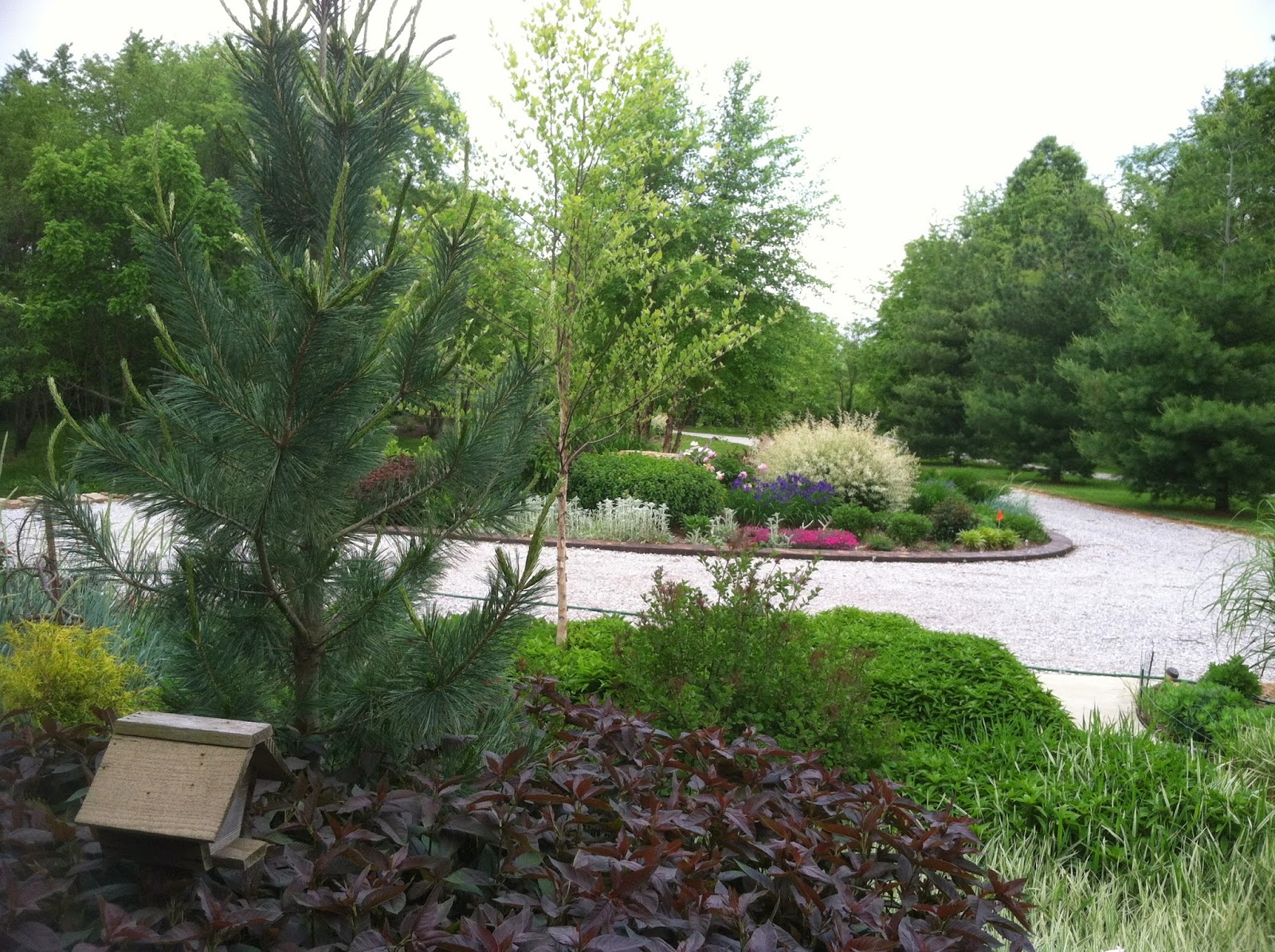 They add so much airiness and brightness to the yard.

Two seasons ago I took after these two bushes in the island and thought I'd killed them.  I'd never pruned them back so hard and I was really nervous they'd never come back.  That first picture was taken the next year.  Gorgeous.  So, when they get unruly (due to my negligence, I didn't keep up with them that season) and need a fresh start, chop them off at the ground, they come back kicking!

This year I chose to just thin them out.  Over this season I plan to "maintain", keeping them around the size pictured above.  One of the nice things about keeping them pruned throughout the growing season is that the new growth is what gives them the gorgeous, bright leaves and airy texture.

Here's a look into how I prune these lovely bushes (when I'm not chopping them off at the ground).  On the left is the before picture, on the right are the shoots I've cut out (and probably quite a bit more).  Basically, I cut out the thicker branches about 18" off the ground and any shoots that are coming up straight through the bush. 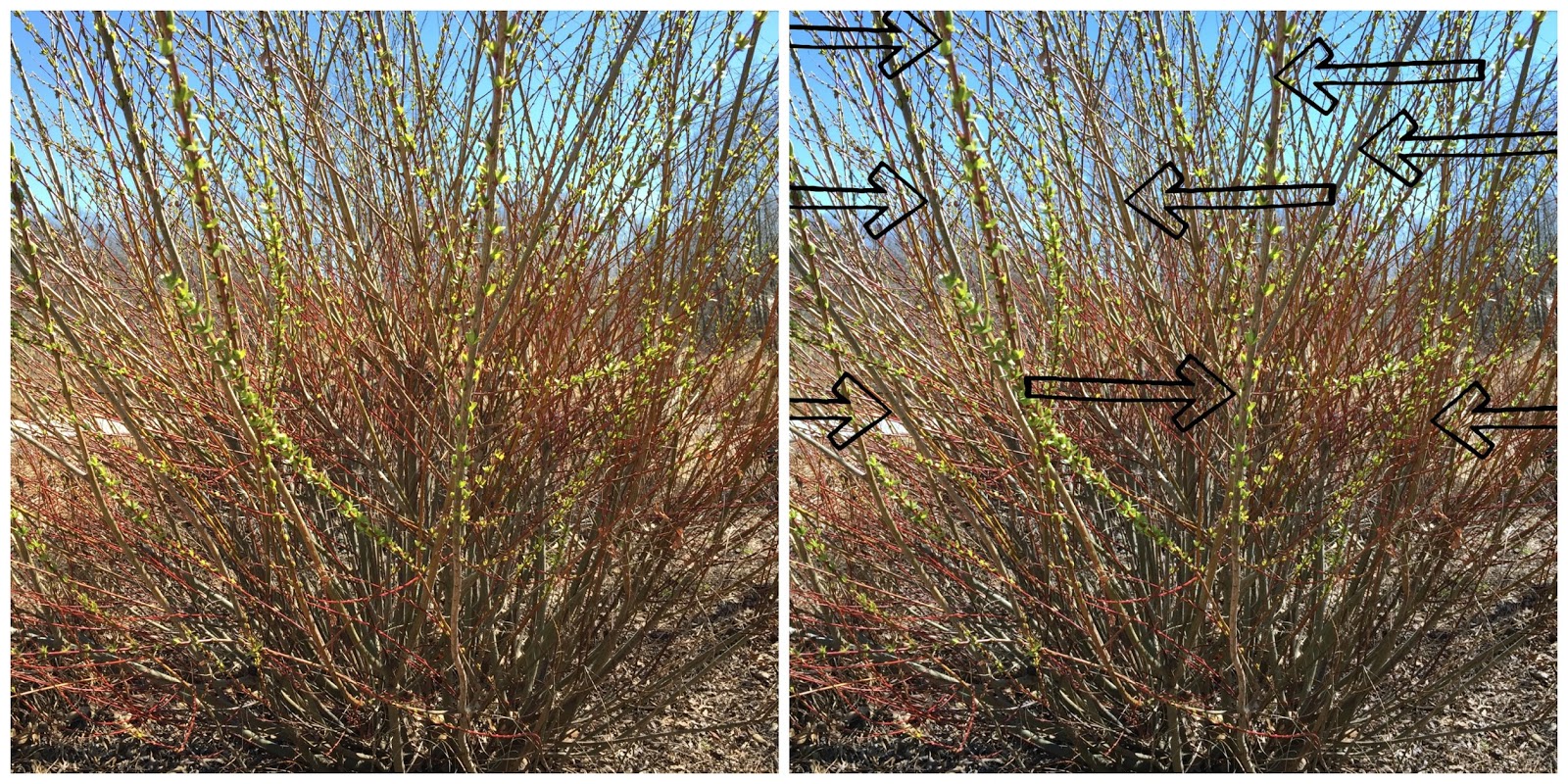 Here's what I'm left with: 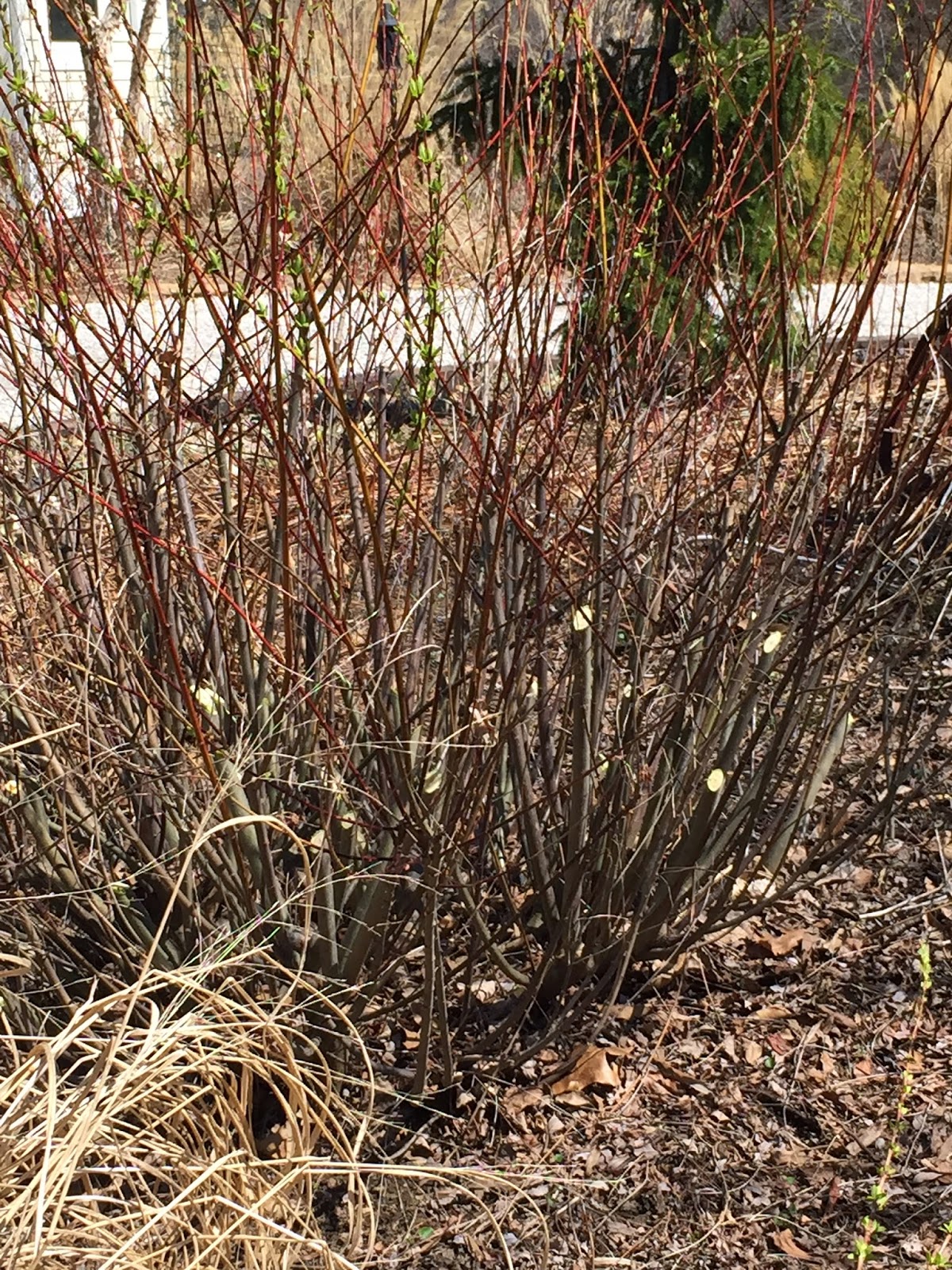 Really, it could stand to have the entire bush cut off at that level but I'm not doing it.  I'm going to let it come in, go through it's first growth spurt and then chop it again.

Here's another look at the before and after: 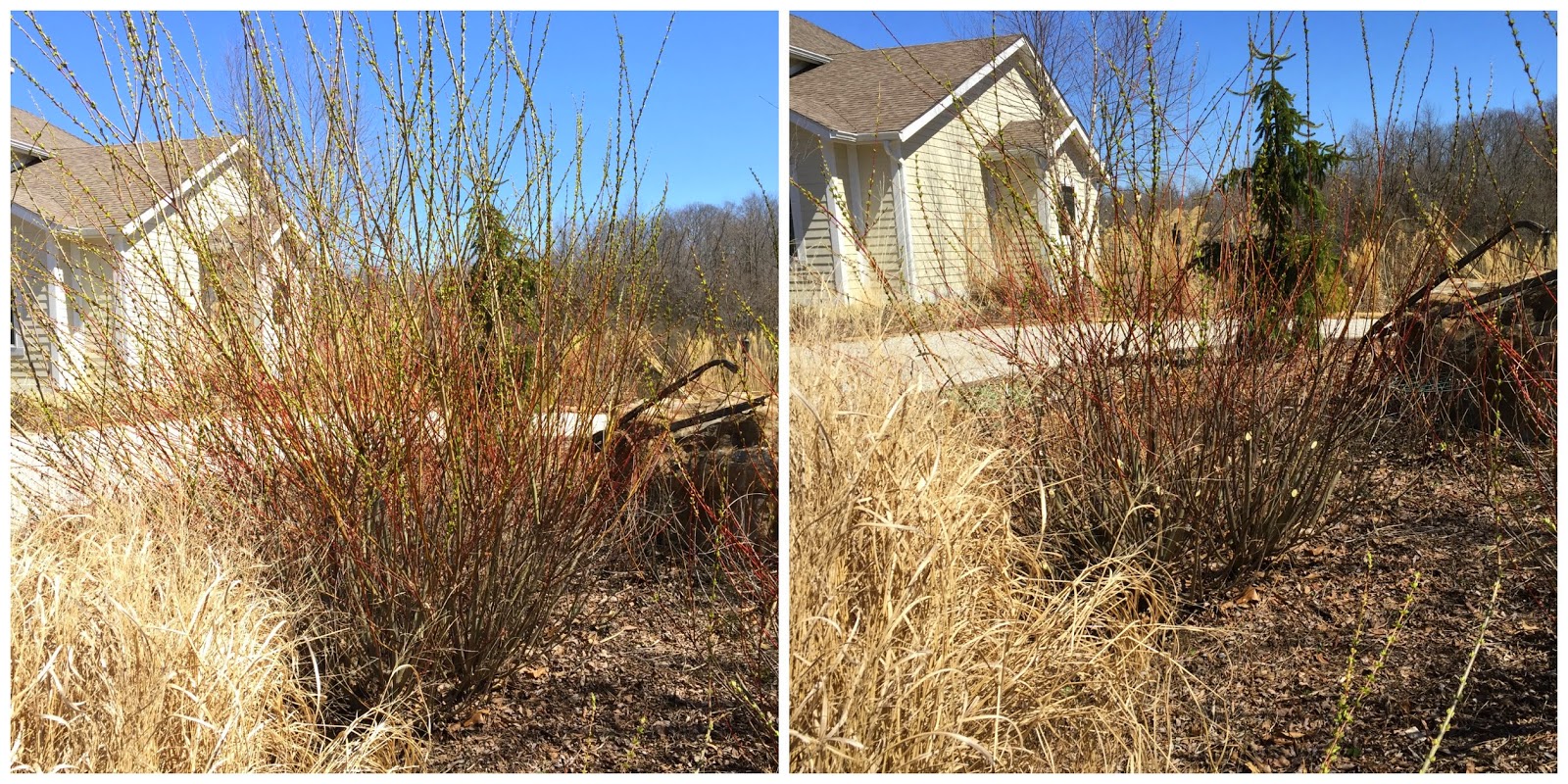 I still have a lot of clean-up to do before it gets any farther into the season.  This is really the same process I use when pruning any of the bushes in my yard.  I try not to prune spring bloomers until after they've bloomed, but will if I feel the need.  My goal is always to go in, thin them out by taking out the largest, oldest shoots and remove any "weird" branches that are dead, crossing or rubbing against other branches or just skew the shape of the bush.

Another great feature of a Dappled Willow is it'll branch out and root around the edges allowing you to dig up "babies".  I'm not good at TLC, like I said earlier, they can be touchy until established, but I have managed to keep a couple of them alive.

Makes a gorgeous accent, feature bush or a great hedge as well, so versatile.  Do you have a favorite bush?  What makes it a winner in your book?

I took the following picture this morning, these bushes are completely unruly.  They would make an excellent hedge wouldn't they?  Due to my negligence I will again have to chop them off at the ground this year.  They are in desperate need of a good hacking! 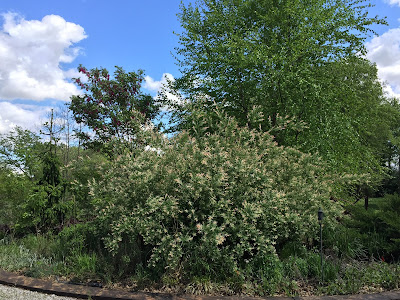 Posted by thechirpingfrog at 4:36 AM