Memoirs of Building Our Home- Part 1 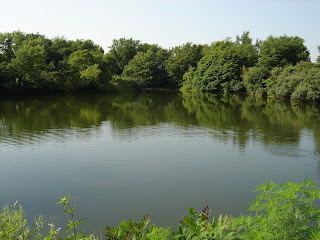 We started building our home in the Spring of 2007 and moved in the end of January 2008.  My husband works in the construction industry so he managed the build and we did quite a bit of the work ourselves.  Lots of sweat, time and energy went into our home and for me, even after seven years, there's not much I'd change.

Have you ever built a home?  Any regrets or things you'd do differently?  Would you ever do it again?  I'd love to take you through our experience and give you a look at our finished product, definately a lot of work but so worth it! 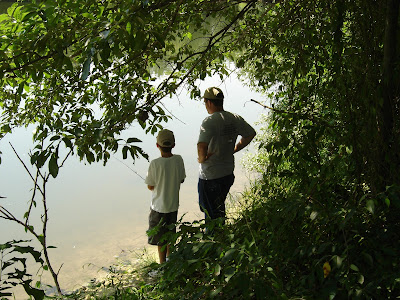 We lived in a new sub-division happily (well, for the most part) until the homeowner's association started up.  Somehow it seems that a little bit of power turns into chaos in such situations and my husband vowed to never live in a subdivision again, so the search for land began.  We looked for years, attended auction after auction, bid higher than our set per acre amount every single time, yet never came away with land.  At one point my husband said, "I give up" and decided he'd make do with the crazy homeowner's association and stay put.

Just a couple weeks later he came home all excited, he'd already put down a deposit on a piece of property, six acres or so with a pond (two actually) and was happy as could be.  We jumped in the truck and ran over so I could take a look.  It was beautiful.  Only negative, county rules say your home must be 50' from the property line.  The way the ponds sit there's really no acceptable location.  Nothing a variance couldn't fix.  I started combing through house plans trying to find something I liked.  That's not as easy as you'd think.

I look at plans with furniture arrangement and traffic flow in mind.  It's amazing to me how many plans are being offered that simply don't work for practical living.  I found aspects of multiple plans that I liked and then one of the architects that works with my husband put them together for us into a workable plan.  Once I had the plan I was off and running.  Before we'd even dug the basement I had chosen wallpapers (one for the bedroom ceiling and another for the dining room) and begun my color scheme and finish selections.  We also took a trip to "World Of Concrete" which gave me tons of inspiration for countertops.

Meanwhile, hubby was constructing the shed.  Come one now, everyone needs the shed built first, right!  Actually it was practical based on our location and need to store tools and set up a painting station. 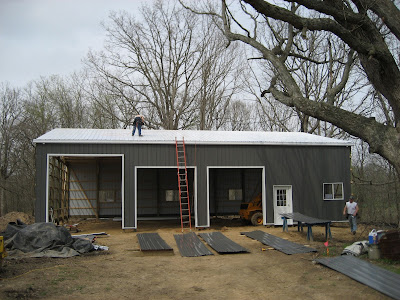 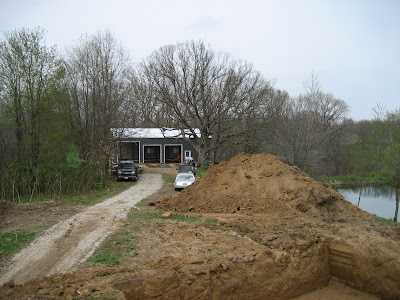 Big day when they dug the basement.  Everyone was a little nervous digging so close to the water.  I wanted the house on the lake and I got it. 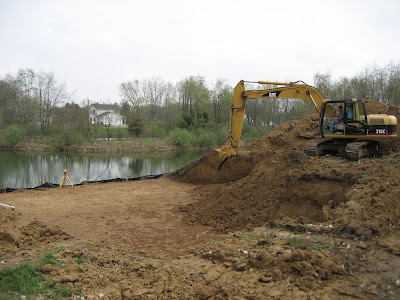 We spent nearly every night at the land working on the house the duration of it's construction.  My husband would get home from work and the boys from school and we'd head on over.  Get home at dark (sometimes later) throw in some type of frozen food for dinner and off to bed.  I think I gained twenty pounds while we built the house.

A friend from church is a plumber so along with my husband they did the plumbing themselves.  All the rough-ins are in and we framed and got the footings poured (we did all the flatwork ourselves when it came to concrete as well). 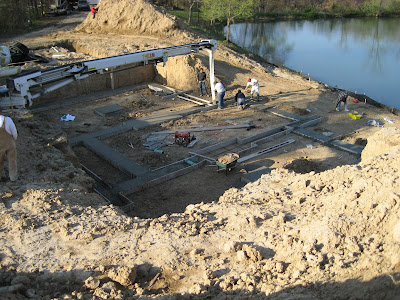 My husband put himself through college pouring concrete, flatwork only.  We did not attempt to do the walls.  That would have been a mess and a little much for a first timer.  It will be a walkout so nearly the entire back wall will be wood framed. 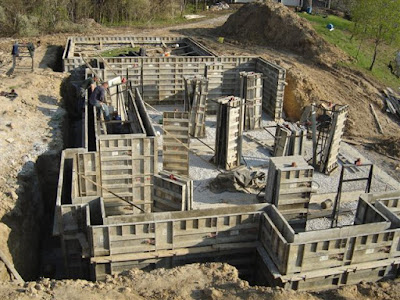 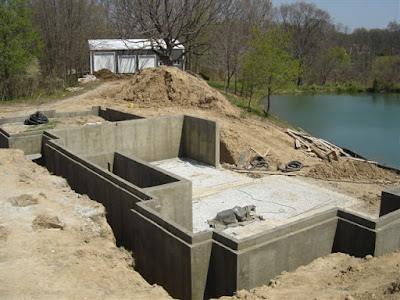 One of my hubby's purchases for the build was a bobcat.  He told me, "we'll need it and when we're done building I can sell it".  Yeah right, boys and their toys.  He's right though, we did need it and we used it all the time and still do.  Been a handy little toy. 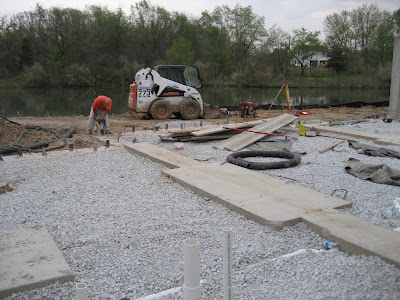 There's a layer of rock in the basement, then a layer of styrofoam before the concrete floor goes in.  We are also doing radiant heat, another DIY project we took on.  Cannot even begin to detail how many nights we spent working on that and how many times it rained on us.  Seems like every time we had tons of work to do and a time crunch it rained like crazy.  The kids (well one of them anyhow) got really sick of working in the rain. 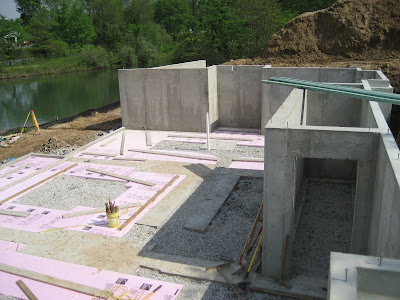 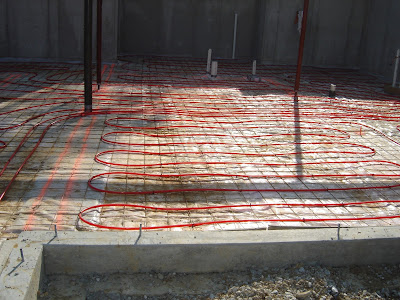 You can see the control area for the radiant heat, a future bathroom rough in, the sump pump, etc.  The orange markings on the plastic are future walls. 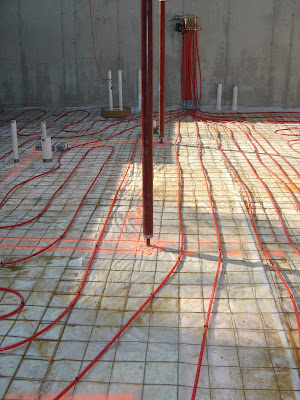 Floor is poured, beams are in, nearly time for framing to begin. 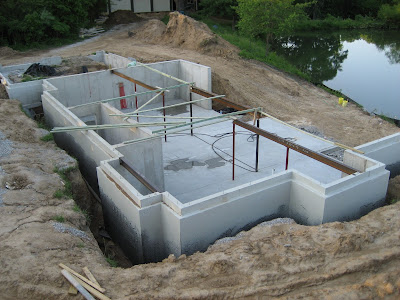 Throughout this process we'd sold our home, found a rental and I was working on my largest sewing project (an entire house full of panels and valances for a client) as well as researching and picking out cabinetry, flooring, tile, etc.  It was a very busy time to say the least and the real fun, the meat of the project for me hadn't even started yet.

Posted by thechirpingfrog at 7:28 AM