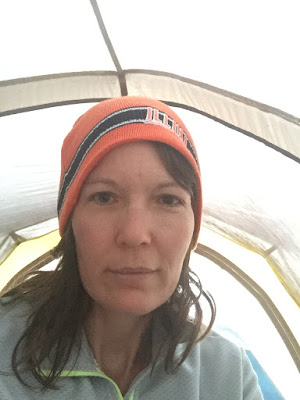 Good Morning from Grand Teton National Park.  Just woke up and its raining, again (it's Thursday today).  Spent last night at South Fork Lower Cascade Canyon and today we're off to Holly Lake for our final night in the wilderness.  Today we will be climbing to Paintbrush Divide (last month we would have needed Ice Axes, thank goodness we don't now, not sure we would of made it).

We've been out since Monday and have had a great time so far, beautiful scenery and good times with the boys.  Here's the link to Part 1 in case you missed it.


We packed up in a light drizzle and headed out with all our rain gear on.  Our path led us up Cascade Canyon to a gorgeous lake called Lake Solitude, a climb of roughly 600 ft.  Would make a beautiful spot for a cabin, just saying! 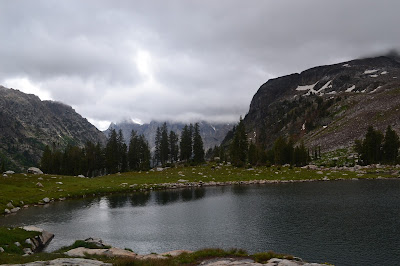 Here I am all decked out in my raingear.  I pretty much wore it all day, even after it quit raining, for warmth. 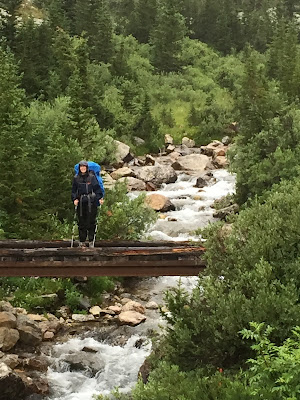 My husband took some really great panoramic pictures with his phone.  This is somewhere along the path climbing through Cascade Canyon towards Paintbrush Divide.

Here we are at Lake Solitude.  We snacked while packing up camp this morning then hiked for a couple miles before stopping for breakfast.  We made some oatmeal and rested here at beautiful Lake Solitude before climbing 2.4 miles and roughly 1700 ft to the top of Paintbrush Divide. 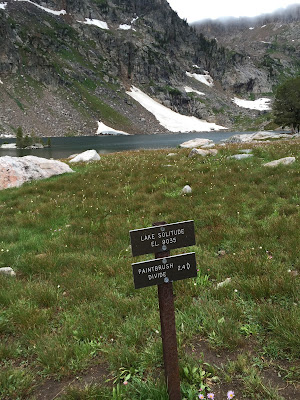 The view down to Lake Solitude and Cascade Canyon from midway up to Paintbrush Divide.

Another view down from the hike up to Paintbrush divide.

In late June you'd of needed Ice Axes to make it up to Paintbrush Divide and the path would of been completely hidden by snow.  That would not have been fun!

This is the best picture I have of Paintbrush Divide.  It was nearly impossible to get pictures.  At the top, once you get out in the open the wind is blowing so hard that you can barely stand against it.  The trail is right at the top with a cliff on the other side, we went down hill from the trail to avoid being blown right off the mountain.  I'm not kidding, the wind was blowing that hard.  All I could do was bend over and push my way forward in an effort to get across the open area and into some protected cover.  WOW!  Talk about an adrenaline rush. 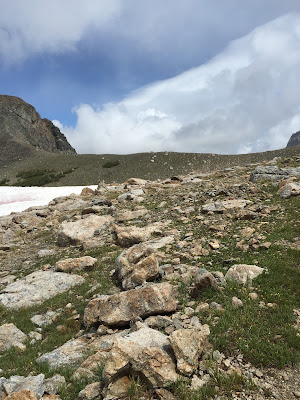 Here's a glimpse as to why they call it Paintbrush! 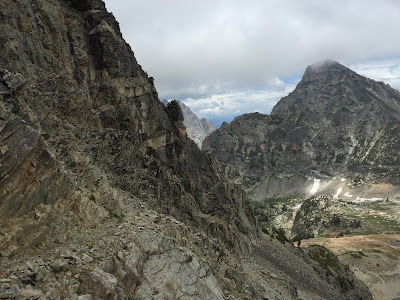 Here's a great shot my husband took on his cell phone once we got into some cover.  You can see the trail there on the right of the picture.  It was such a beautiful view but unbelievable winds!  Scary! 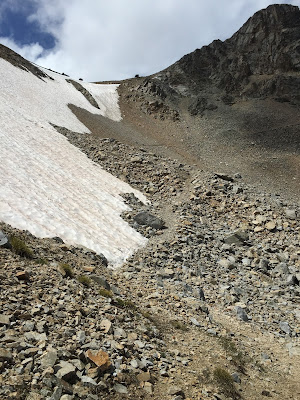 We walked through multiple snow banks going down the mountain after Paintbrush Divide.  I slipped and fell on the next one.  Didn't hurt myself at all just slid on melted snow and landed, softly on my tush. 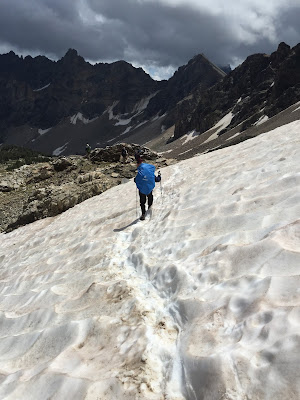 This is the view into the valley, tomorrow's hike.  Towards the left of the picture is Holly Lake where we'll be camping for the night. 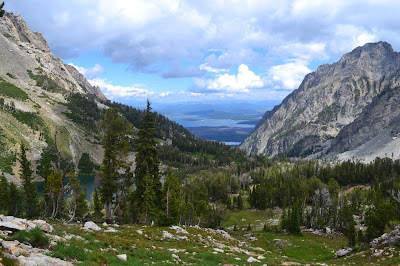 As we were setting up camp this deer kept working her way closer and closer to camp.  Think she was looking for an easy meal. 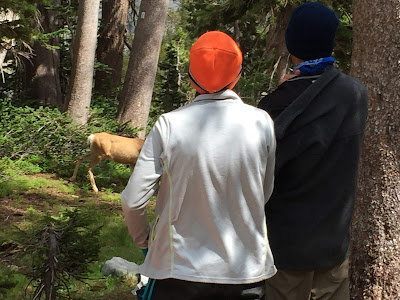 The boys were in charge of collecting water, this is the lake drainage area and was the closest source for tonight. 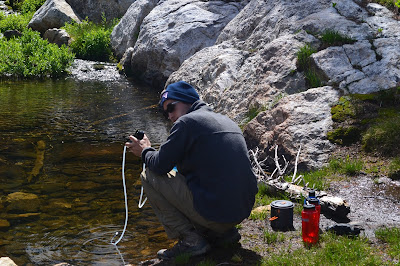 Here's campsite 2 at Holly Lake.  The lake is off the top right and corner of the photo while the drainage is off to the top left. 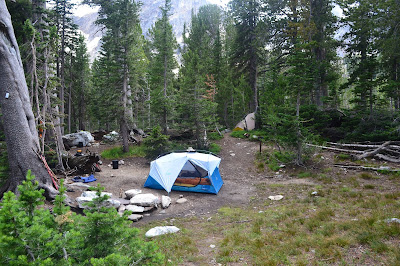 We bought some cards to bring with us so we could keep ourselves busy at night.  This site was set up for it.  We played a couple rounds here before it started raining and we headed off to bed. 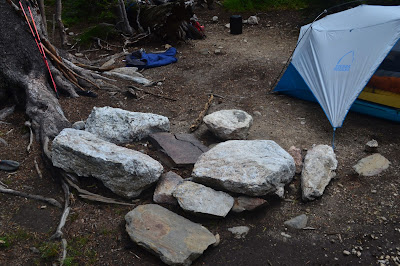 We had mountains on three sides and the valley opened up on the other.  The winds were coming from the mountain side and rushing through camp all night long.  Thought the tent was going to lift right off the ground with us in it.  Amazing!

The boys were nearly giddy in the morning, last hike out and then food and bathrooms.  Too funny.  Complete strangers asked them about their hike and all they could say was how happy they were to have real bathrooms.  Geez guys!
Anyhow, if you've followed along I'm sure you've noticed the hiking was gorgeous and we had no problems while out in the wilderness.  Any complications centered around the park and how user-friendly it might or might not be.  When we picked up bear vaults and our permit on Sunday we asked multiple questions of the worker and made some plans for our exit.  Well, needless to say things did not go quite as smoothly as we'd hoped.
We were told there was a shuttle from Jenny Lake (which is where we'd be exiting the wilderness).  We didn't think to ask where at Jenny Lake.  There's a "Lodge" and a Visitor's Center.  We were closer to the "Lodge" so that's where we headed.  The boys were planning lunch, very excited for food and bathrooms.  Well, the "Lodge", not a Lodge, it's just a bunch of cabins that can be rented.  No bathrooms or food for public purchase and definately no shuttle.  The Visitors Center is another 3 miles.  The boys were not happy. 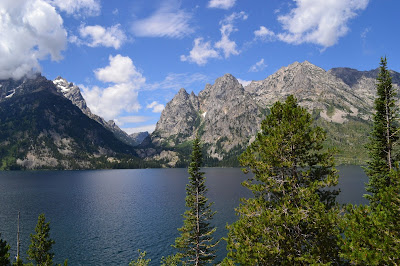 We took a quick break on a bench and a sweet lady offered to take our picture.  Turned out great, thanks! 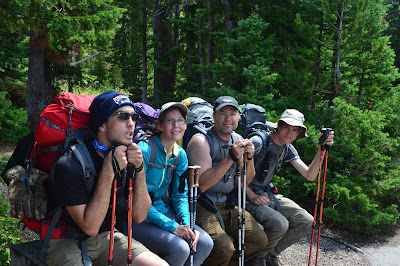 Caleb was looking for a bear the whole time.  Finally, last day and the most populated area of the park, saw a bear.  Completely ignored us. 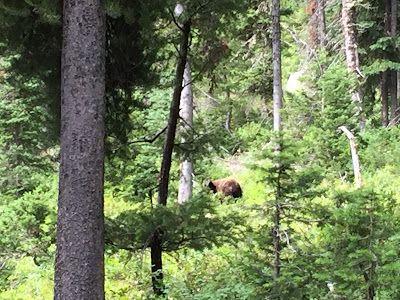 So, here we are, exhausted, haven't eaten a real meal for nearly a week, looking forward to one so badly that we didn't even eat breakfast this morning, we simply packed up and headed out (we did eat a snack before leaving though) thinking Jenny Lake would offer Lunch and then head into town for dinner (that was hubby's plan anyhow).  Well, again, thwarted!  Jenny Lake has a small visitors center and gift shop.  Snacks again.  Also found the shuttle schedule.  Yeah, not a consistent schedule and it doesn't drop off where we were told.  It's 1:00pm and the shuttle is done for the day.

So, taxi cab it is.  Dropped our packs, grabbed a snack and lounged in the shade to wait for the taxi, still dreaming of a cheeseburger and fries!

First stop after getting back to our car is getting a camp site for the night.  We had planned a white water rafting trip for 8:30 am in the morning and were planning to head out of town right after that.  Thwarted again!  Wouldn't you know it.  If you read Part 1 I mentioned that the park offers no reservations for their campgrounds.  Pulled into the campground, no sites available.  Now what?

Hubby, being the excellent planner that he is, immediately called the white water rafting company to see if they had any openings.  It's now 3:30pm and their next trip begins at 4:30, we could make that.  So, off we go.  Still haven't had a meal, just snacks, but with no place to stay for the night we might as well hit the road, but not without our white water rafting trip. 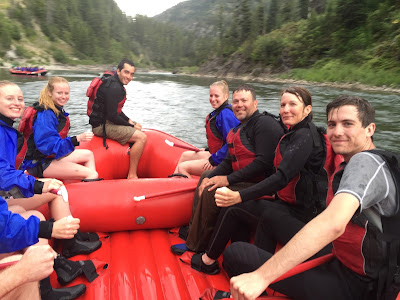 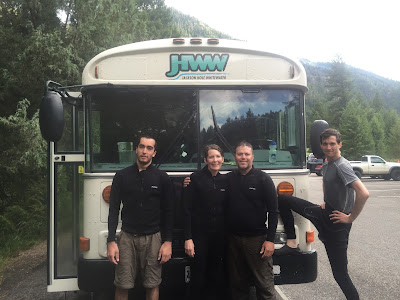 We had a great time.  Our trip was through Jackson Hole White Water Rafting Company and I believe our guide was Tom, he did an excellent job.  So glad we went.  We got back to our car about 8:30, still no real food for the day so our next stop, that hamburger and fries we'd been dreaming of all day (well, for many days depending on who you ask).

We ended up walking into MacPhail's Burgers at 8:45 pm, they close at 9.  Felt bad but we'd tried to eat there before we started our backpacking adventure and the line was out the door.  Thought we'd give it another try and we were all dying for a burger.  By the time we got seated it was nearly 9:45 and we were starving.  They were very gracious and kind, considering it was 10:30 before we left (I think that's par for the course around there).  Food was great and their kindness was greatly appreciated!  We sat at the bar and were really impressed with them, they were so friendly and considerate, I'm sure they could tell by looking (or smelling) that we'd had quite the week.  We even got the cook asking us how our meal was, don't get that very often.

Our trip home began at 10:30 pm after a wonderful meal and a strenuous, adventure filled day!  We drove about an hour out of town before we found a place to stay.

Moral of the story:  Do your research?  I was not as prepared as I could of been for the difficulties of traversing this particular park.  Some of our obstacles I could have saved us from if I'd done a little more research (namely a phone call, the internet was not much help either).

Have you been to Grand Teton National Park?  How was your trip?  Anything to add or share that might help the next person heading out that way?