Memoirs of Building Our Home- Part 4

Have you ever designed and built your own home, how did it go?  We started our journey in the Spring of 2007 and moved in the very end of January 2008 and what a journey it was.  This is my attempt to chronicle the progress we made and the variety of mini-projects we took on ourselves.

Here are some links to get you caught up if you'd like:
Part 1- the basement is poured and the beams are in, time for framing to begin.
Part 2- framing is nearly done
Part 3- Windows and doors and a few small concrete projects 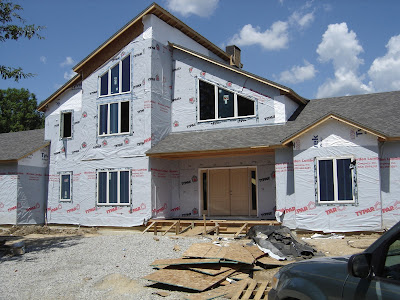 The framing is done, windows and doors are in and we now have a lockable shell.  Its time to put in the plumbing, electrical, computer/phone wiring, house vaccuum plumbing/wiring and gas lines.  Do you think I took a single picture of all that?


Of course not, what was I thinking!  My husband and a friend from church ran all the plumbing and gas lines, as well as the house vacuum piping/wiring.  Jason and I spent weeks, I'm betting the better part of a month running wires for the "data closet".  When I have problems with the internet and the maintenance guy comes out and thinks I'm just an idiot because I can't follow his directions, well, I just have him take a look at this and it usually changes his tune or at least shuts him up! 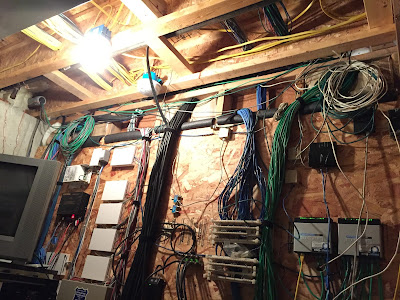 I am electronically challenged but come on now, this is a little much!

After our wire-pulling party the drywall finally starting going in, really making things come together.
Here's the kitchen.  You can find more information about the island in a post called, "One Way We Used Concrete In Our Home".   BTW, the wall that all the wires are using is the back wall of a closet for a future bedroom in the basement that is helping to support the added weight of the island. 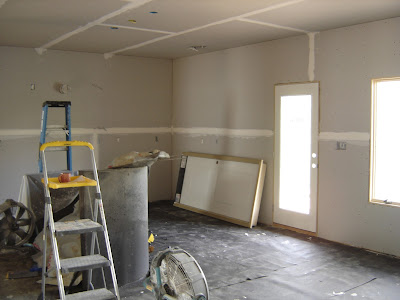 This is the master bathroom, you can see plumbing for the sinks and electrical for the light fixtures as well as a phone line (come on now, you know you want a land line in reach of the toilet) as well as security wires and outlets.  The little half-wall in front is the future shower. 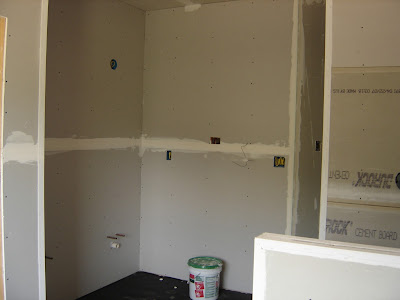 There are two bedrooms upstairs for the boys that are mirror images of one another.  The door leads out to the deck that we've been working on all year, Our First Project of the Season 2015. 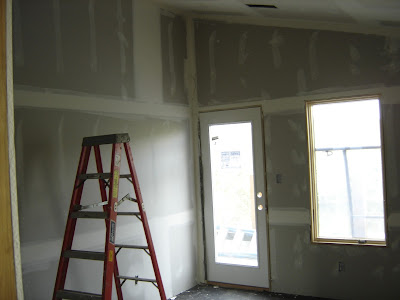 Here's a look at the Master Bedroom.  I have a striped wallpaper that is going on the tray ceiling and I've chosen a pale green color for the walls.  They aren't cut out yet but there's also speaker wire in the ceilings of nearly every room for a sound system (you saw all those wires, right?). 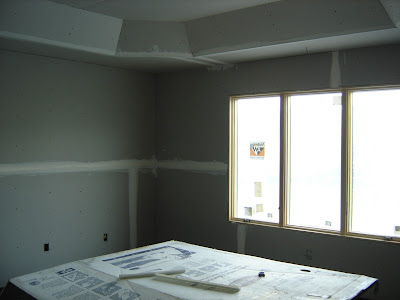 The basement digging began on 3/29/2007, the island project took place on 7/20/2007 and these drywall pictures were taken on 8/25/2007.  We were busy little beavers!  Next time, well, the real fun is about to begin.  Light fixtures, cabinetry installation, doors and trimwork, fireplace stonework and eventually some flooring (we're doing the hardwood ourselves).  It's really starting to take shape.  It'll be eight years this winter since we moved in and I still get excited thinking about the process and watching it come together.


If you've taken on a remodel or built a home I'd love to hear about your experience.  Would you ever do it again?

Posted by thechirpingfrog at 7:12 AM