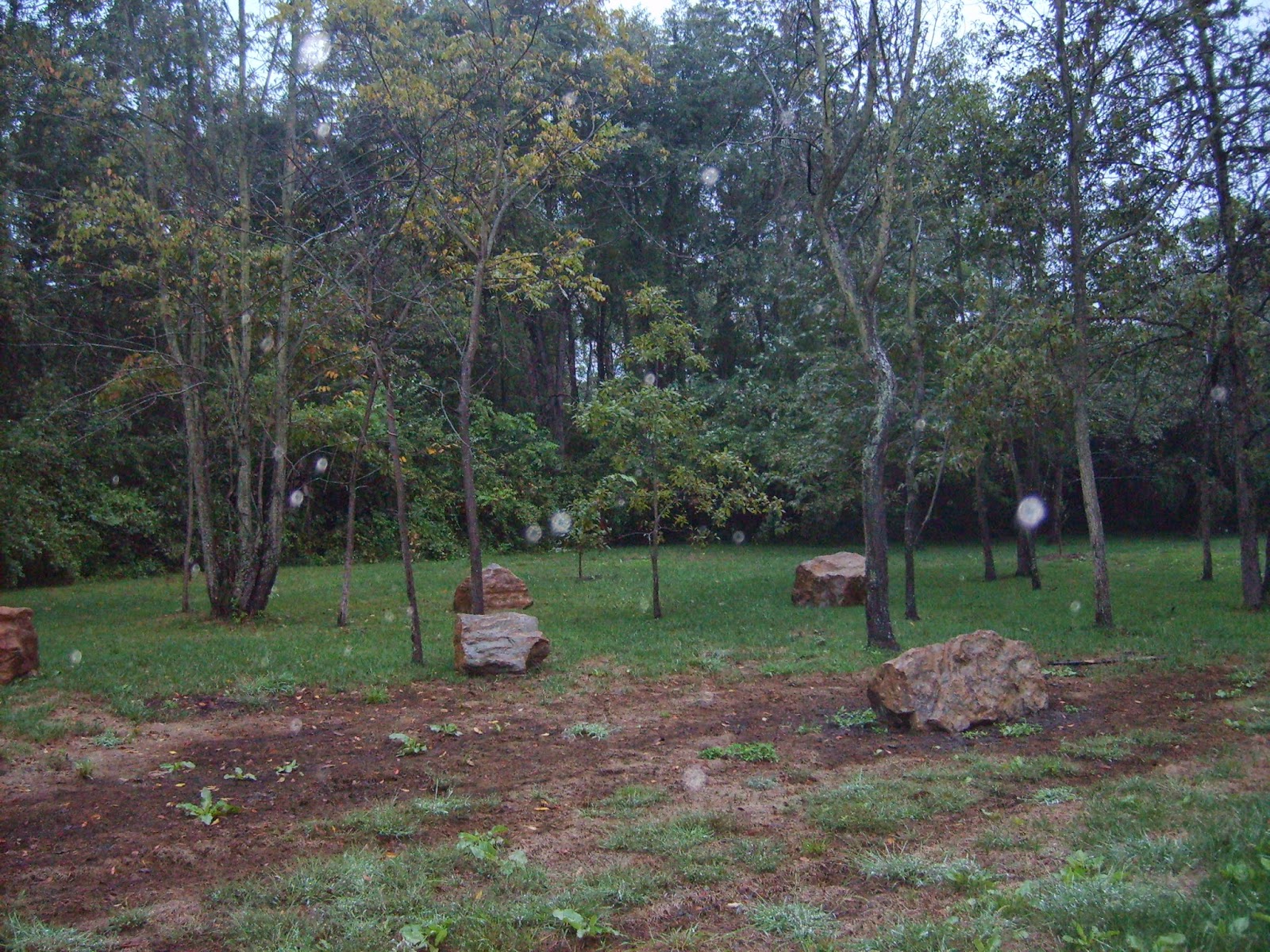 This is a look at what I was doing last year about this time.  I really wish I could say I've made great strides over the summer with this project, but I'd be lying.  Here's to another summer gone and a hopeful heart that next year I'll be able to check something, anything, off of my growing project to-do list.


I mentioned previously I'd share my crazy with a flower bed I've been working on for years.   When we bought the land where we now live I always knew I wanted a "botanical garden" feel around the yard and lake.  Slowly, over time (lots of time) it's coming together.  I've had a vision for the front of the property, granted it's changed somewhat and continues to evolve over time, but a vision none-the-less.

This entire area was overgrown and full of junk trees and vines, ugh!  My hubby took the bobcat and ripped most of it out.  I spent two days running a burn pile to get rid of it.  We had a few large rocks left over from another project so I had him place them around out here and that was the extent of this years work, (I told you "years in the making").

The following year we added berms.  A large one closest to the driveway and two smaller opposite of it.  This area measures roughly 90' x 50' and I plan to cover it in it's entirety with flower bed, someday!  Here's the end result of another year's work: 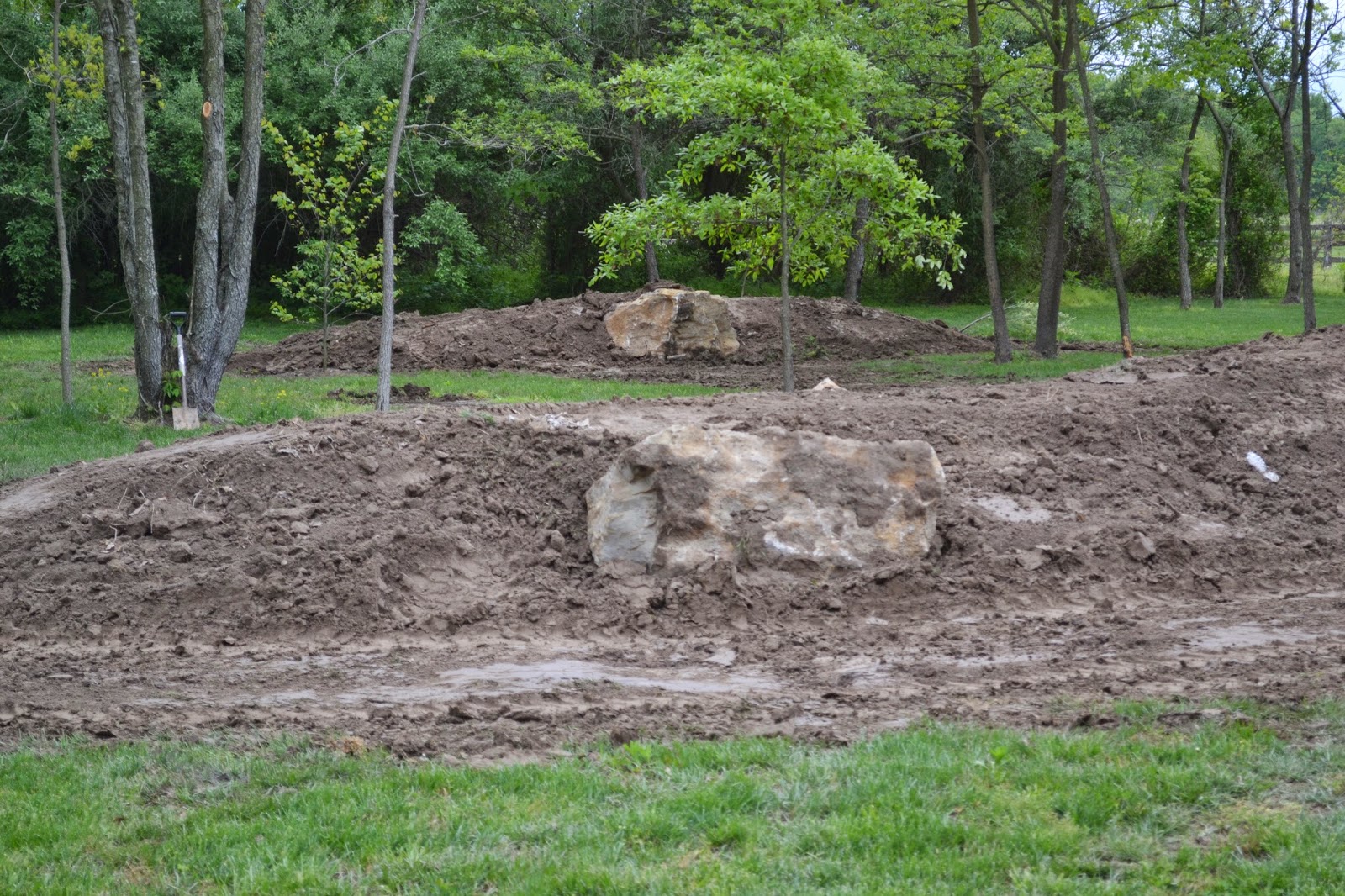 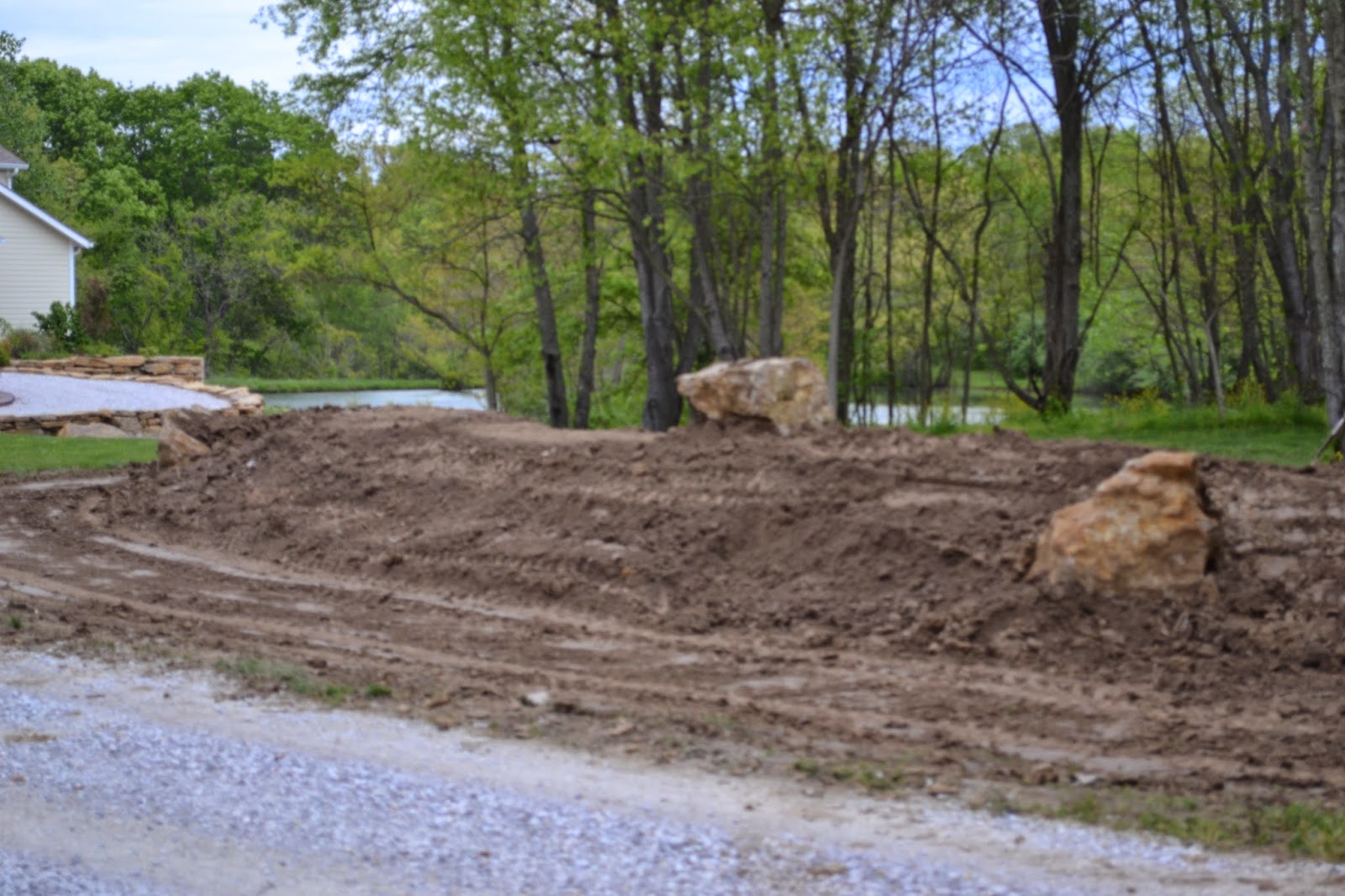 Year three, structure.  Well, in the berms anyhow.  I added some trees and shrubs.  I love natural perennials mixed with structure and I tend to let them take over (within reason anyhow) so I always have babies that need removed, they have a new home out here.  I got it mulched too, lots and lots of mulch! 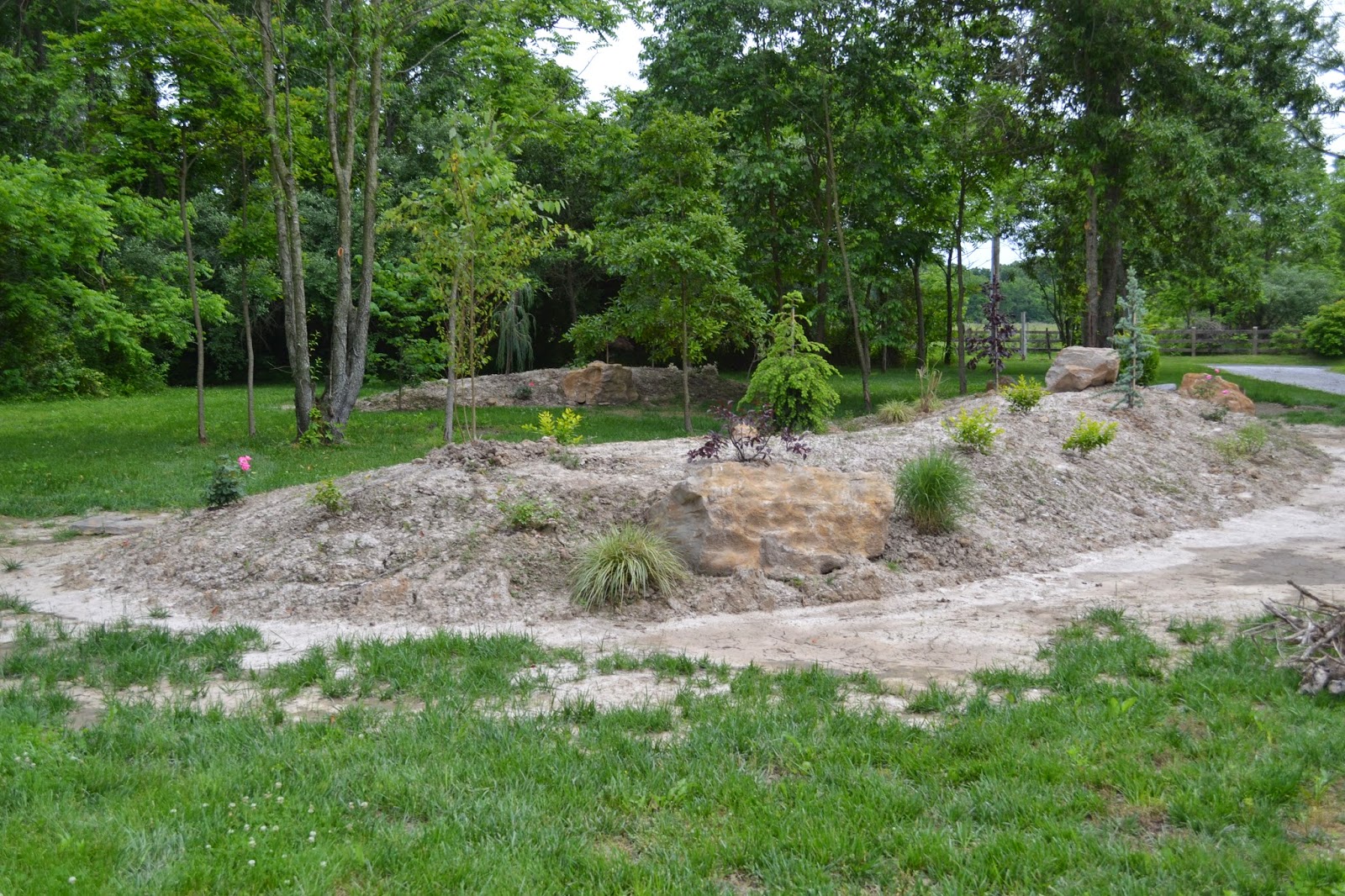 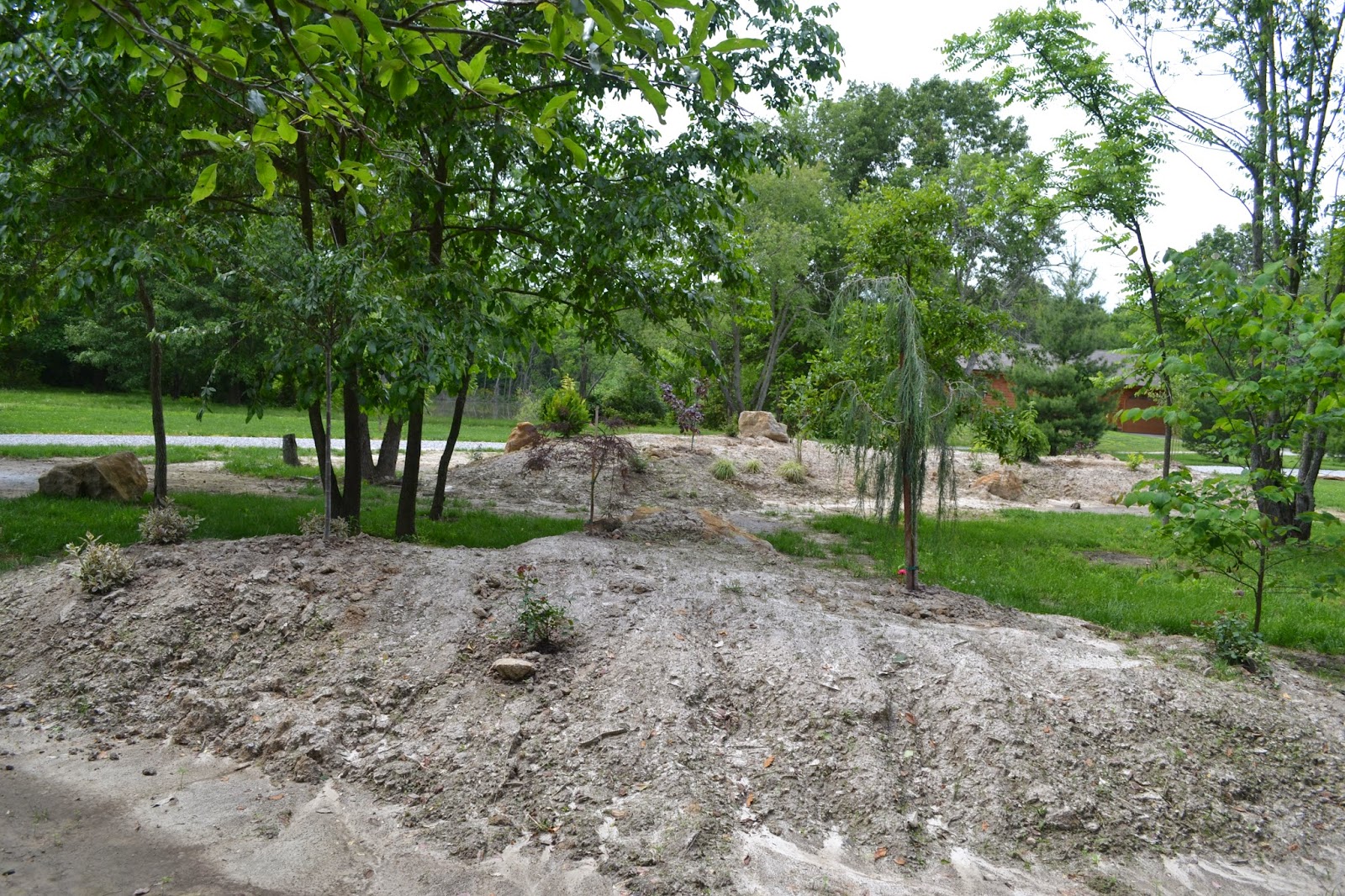 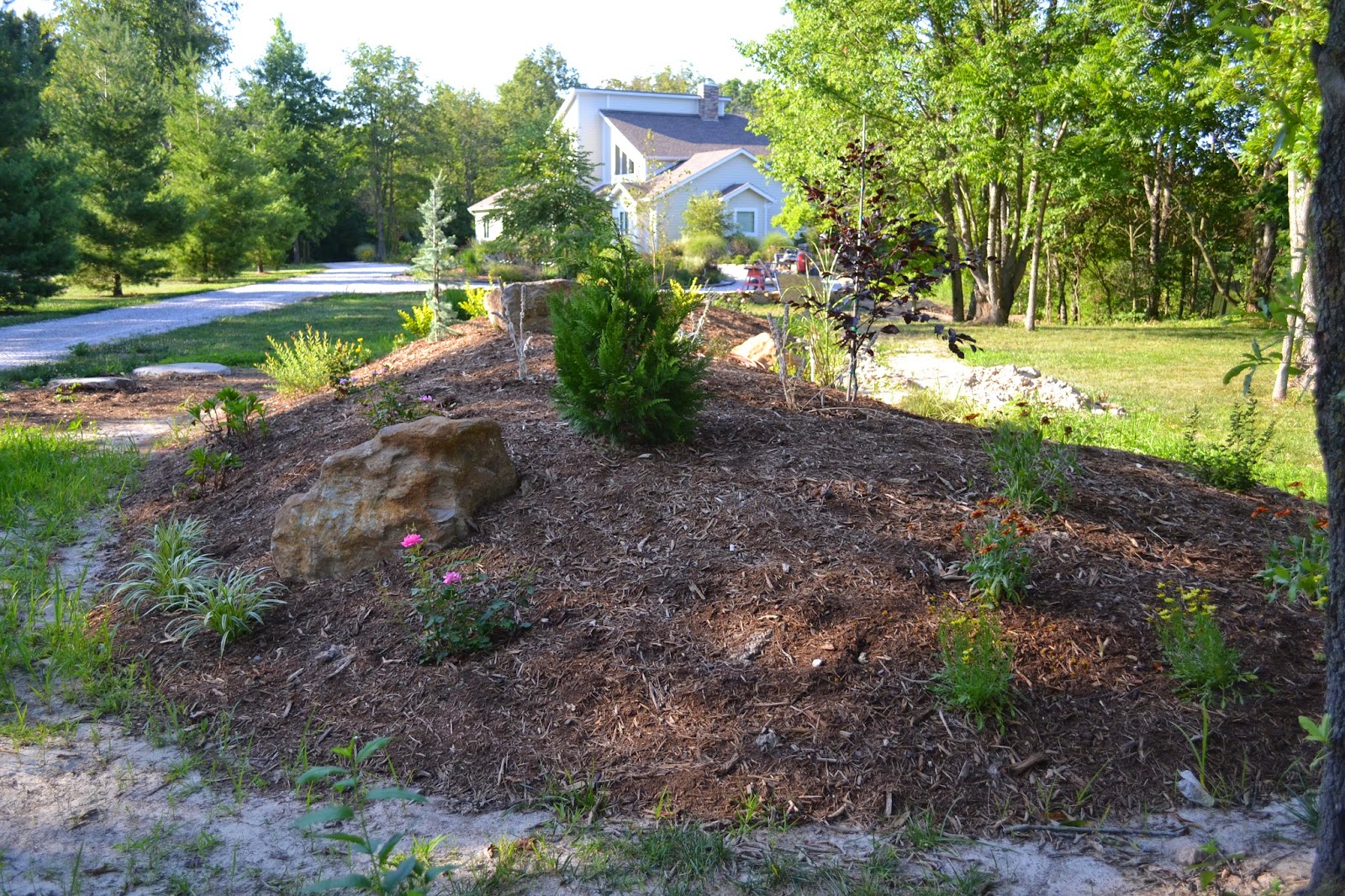 Year four, my husband decided he couldn't take another year of hoses from the house out to the flower beds so, I got a watering system this year.  The boys and my husband dug trenches all over the yard and hooked it up to a pump system taking water from the lake, works great!  I also added a few bushes to connect the two smaller berms. 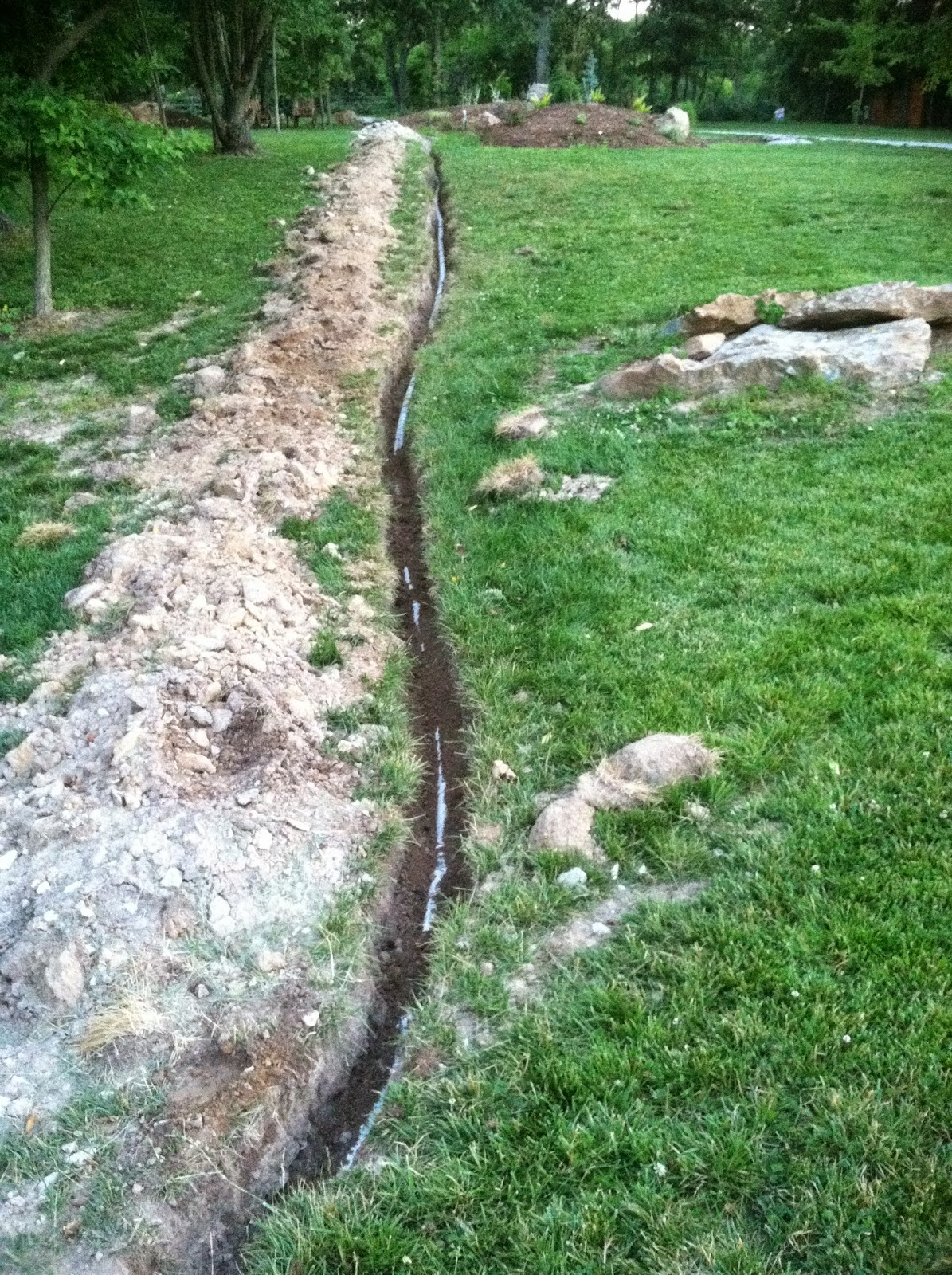 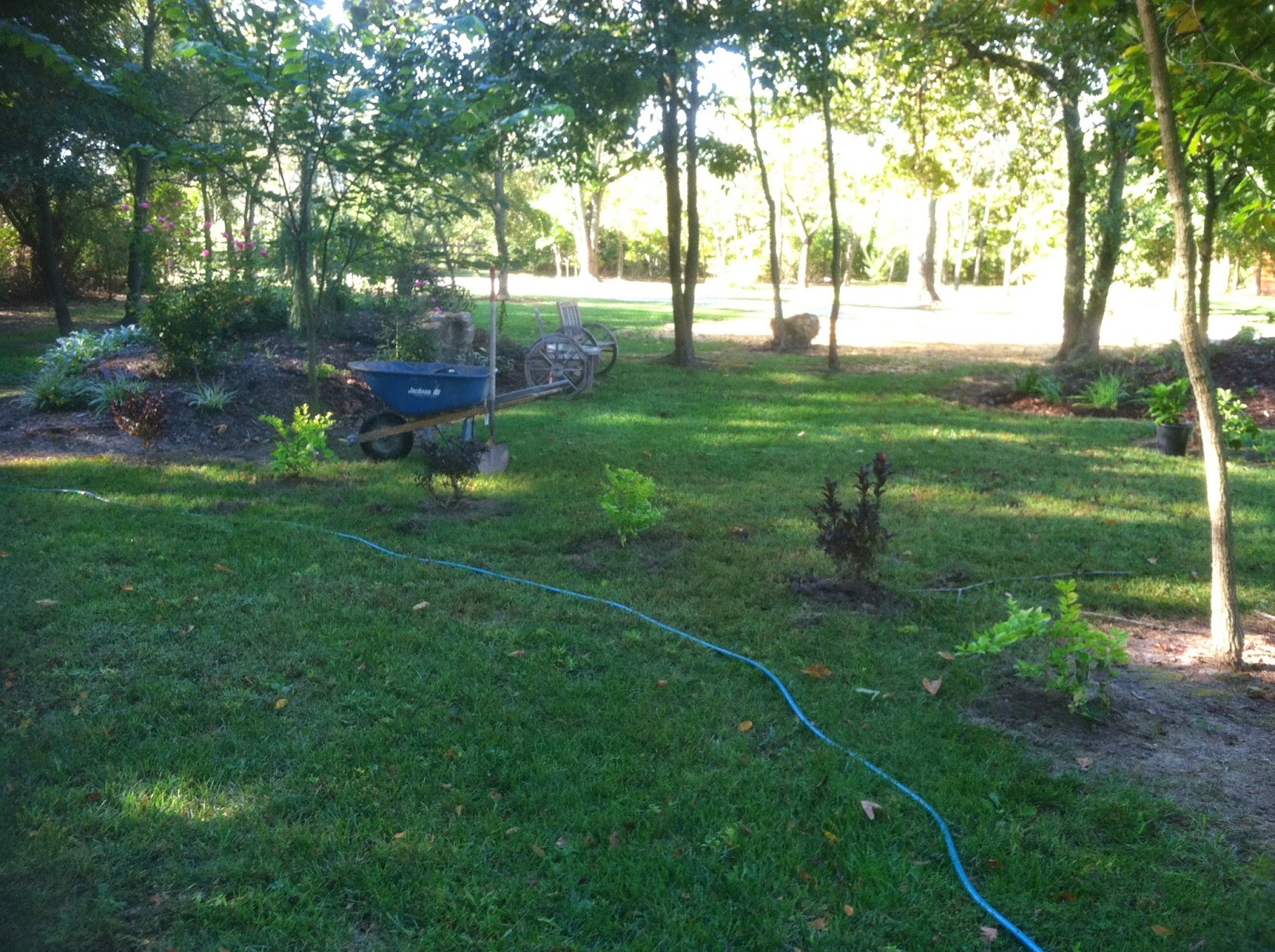 Now, it's amazing what a couple years can do, it's overgrown.  I have a path through the center planned that'll lead from two "activity" circles.  I have started them both but completion will have to wait.  I've also added some rock to the bushes above to make mowing a little easier.  Another year gone. 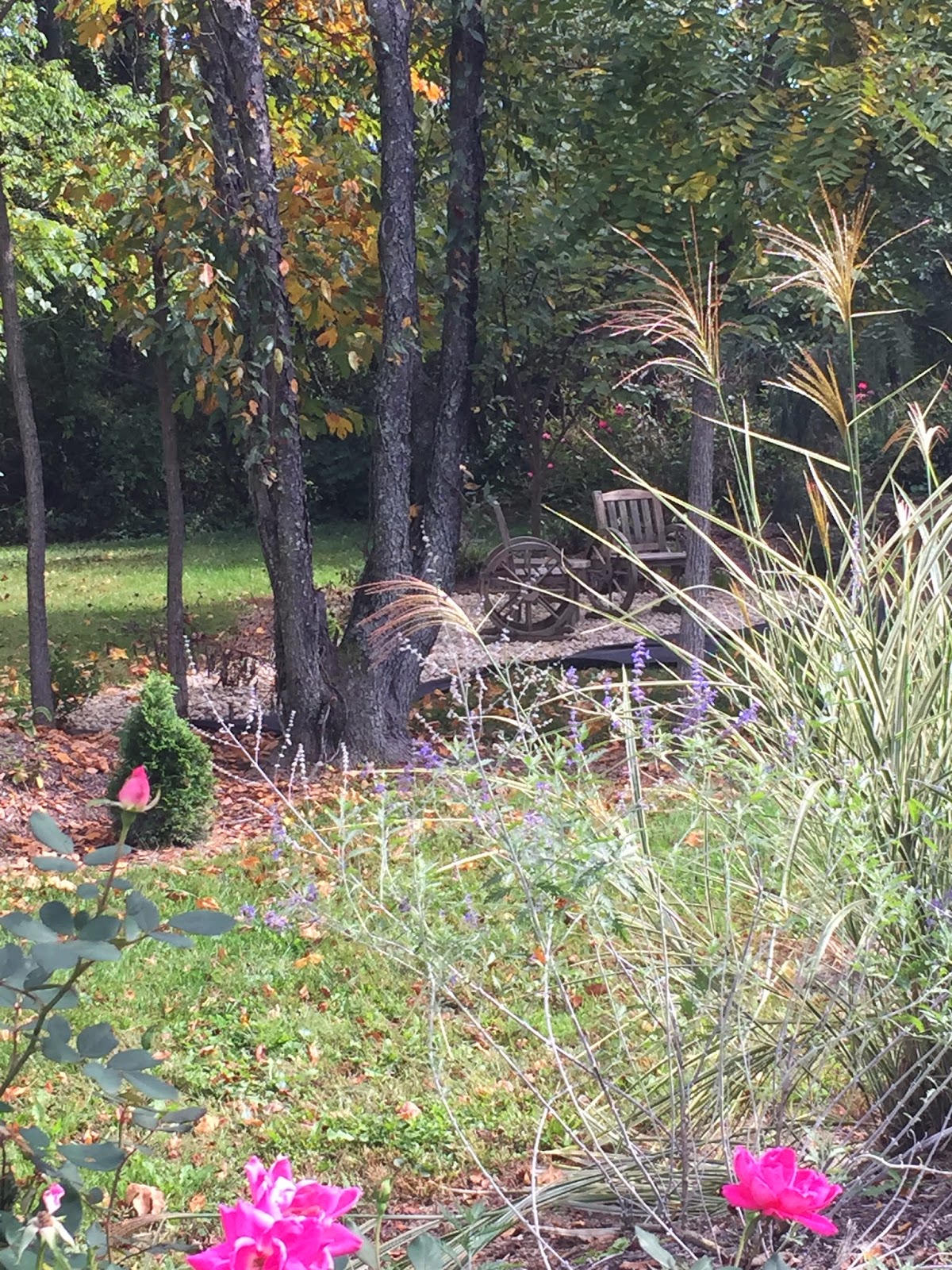 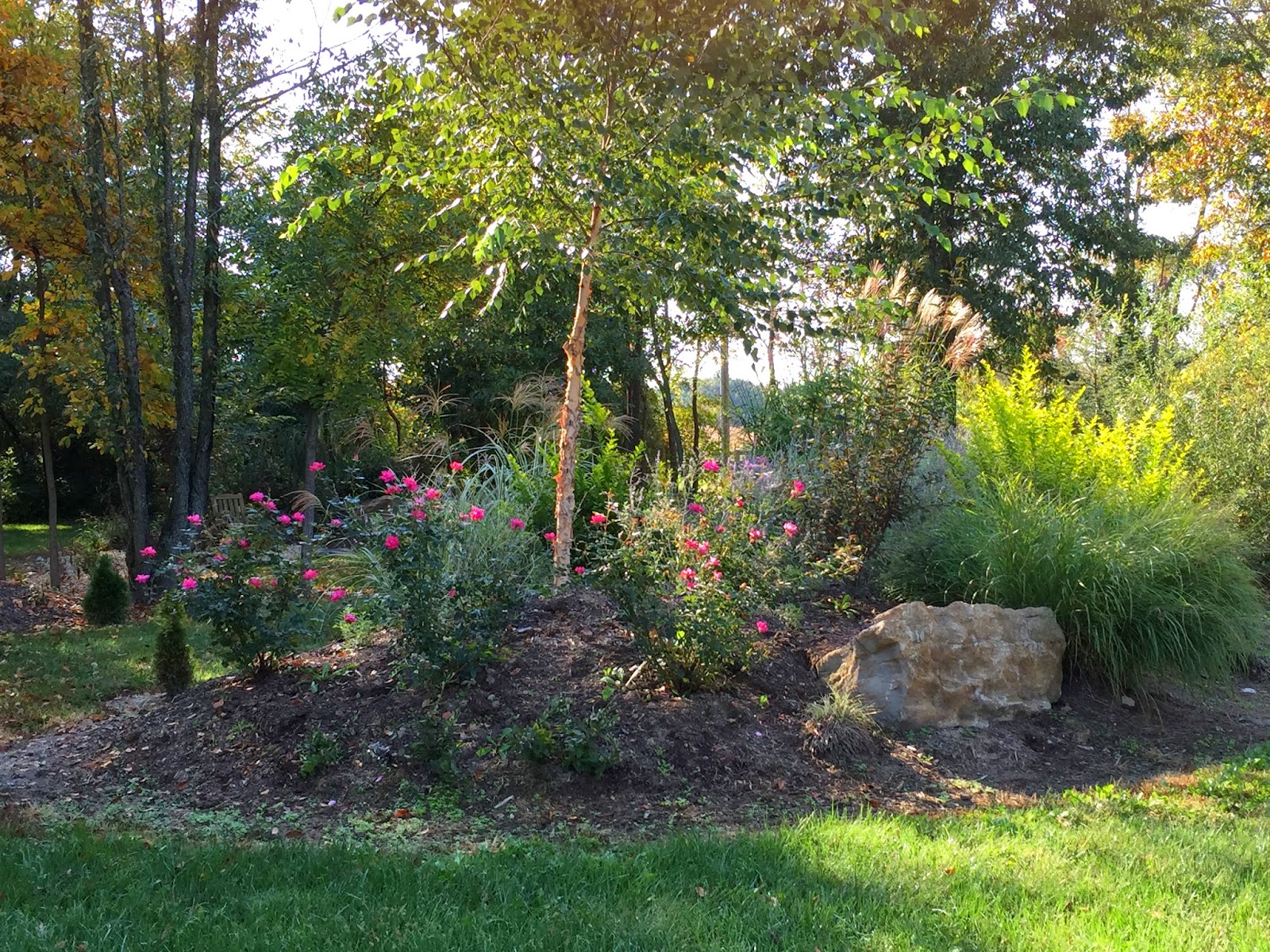 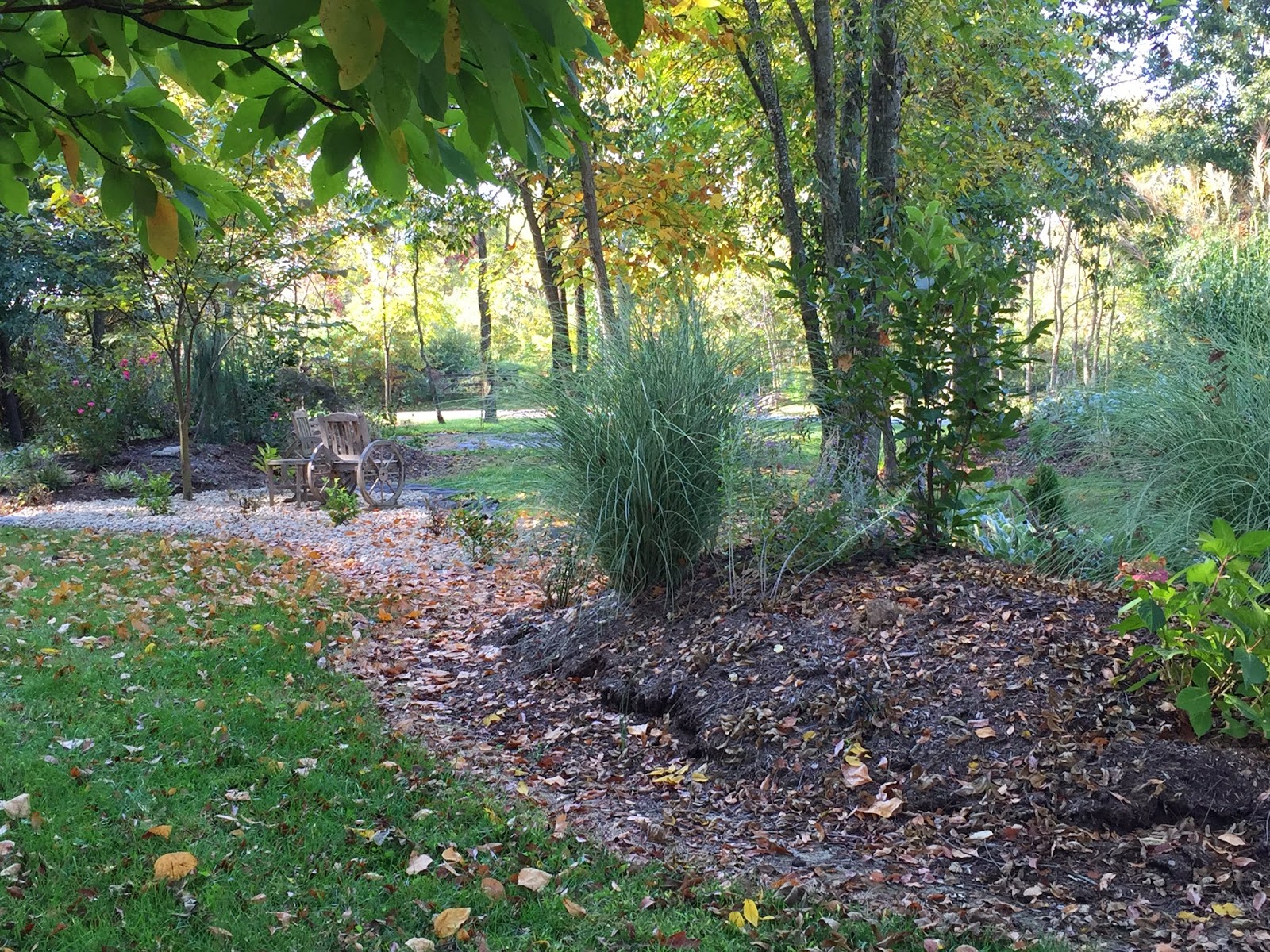 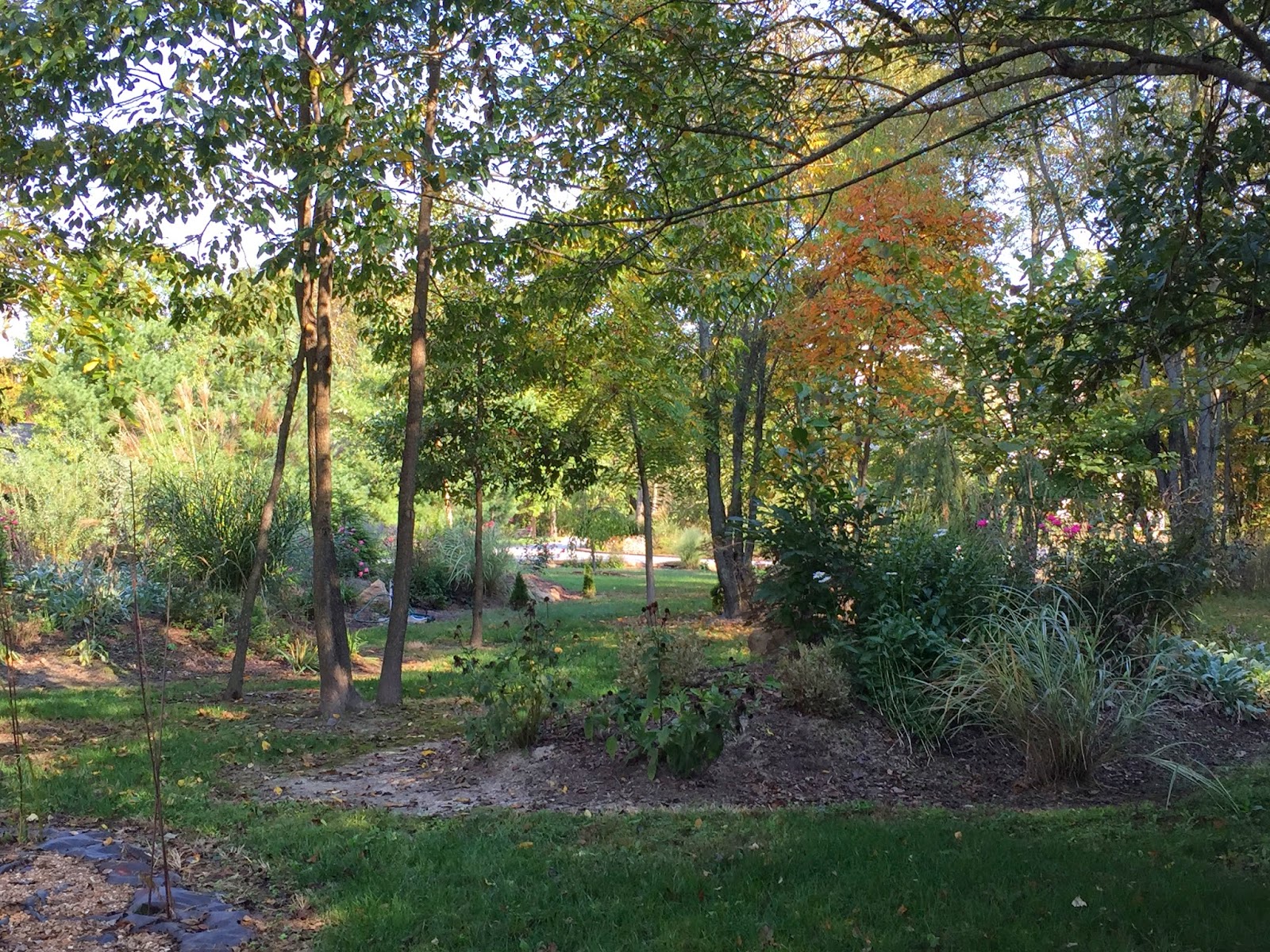 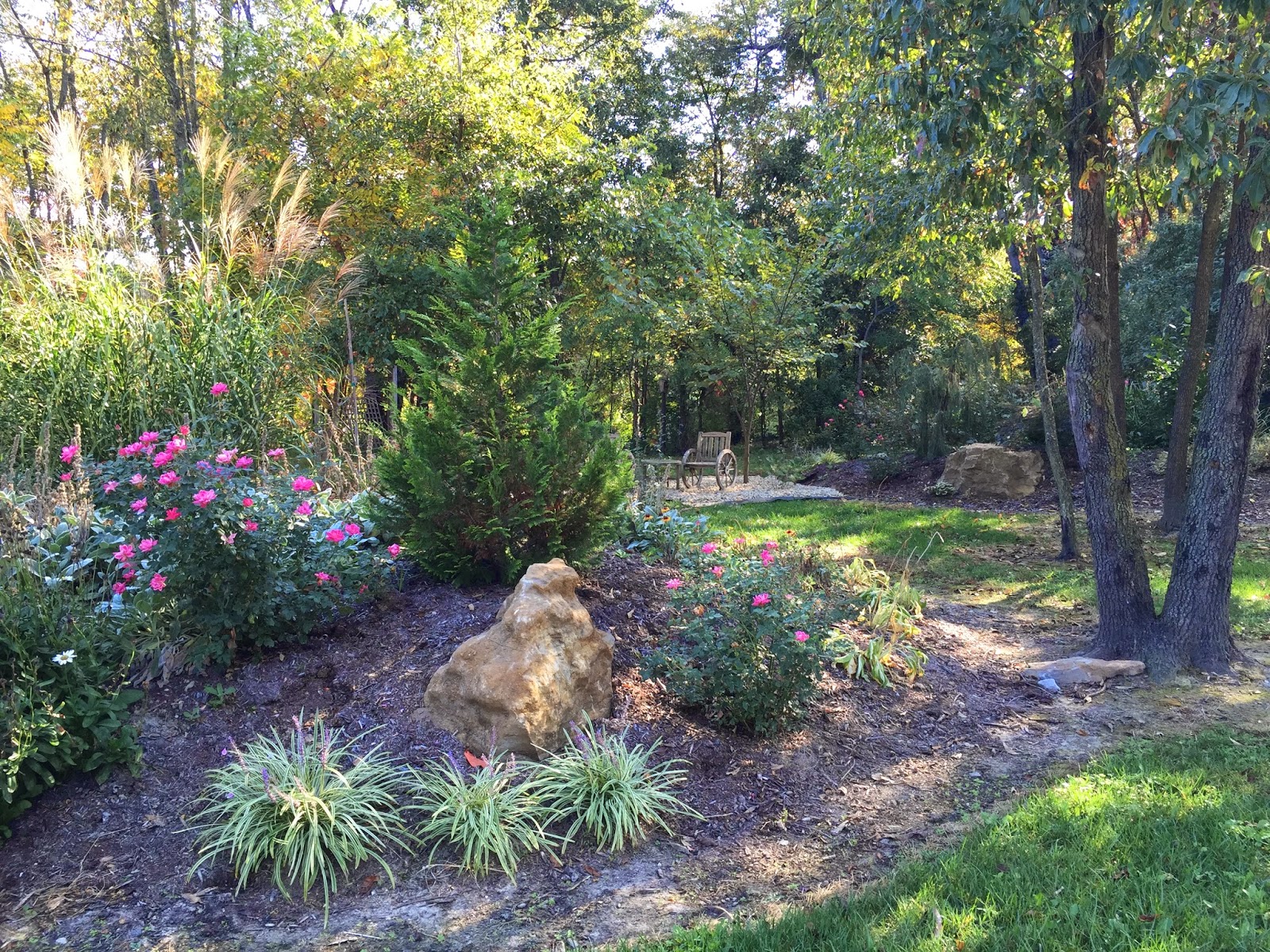 I have a wall I'd love to do out here with bottles that I've been collecting for a couple years (they've taken over the shed and a portion of the garage) as well as a play house made with water bottles (those are spilling out of every nook and cranny as well) and of course the walkway, who knows what direction it'll take in the years to come but it certainly is fun figuring it all out!

Update:
Well another year has come and gone and I hate to say it but I've gotten absolutely nothing done on this front flower bed.  I went out and edged in the walkway but haven't had a chance to do anything else.  This area is in desperate need of some TLC.  Where does the time go?

I still have plans, of course, they've just been put on the back burner for a little while longer.  On a positive note, my bottle collection is growing and my shed is beginning to look like the local recycling center, won't be scrambling for supplies when I do get around to my projects.  That's good, right?

I have a series I've worked on detailing our landscaping adventures throughout the yard if you're interested.  Here's the links with a short description of the content.

Posted by thechirpingfrog at 6:51 AM