How Do You Handle Unexpected Challenges In Your Day? 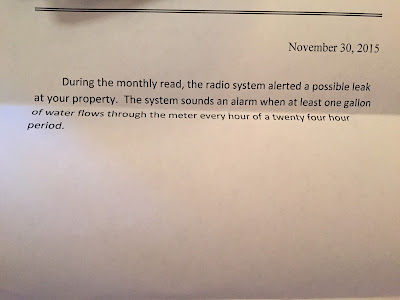 My husband picks up the mail every night when he gets home from work. On Wednesday, this is what he found:
This letter is marked November 30 and we got the letter December 2.  At least 24 gallons of water every day for 4 days has been leaking, somewhere in the water system of our home.


Living in the country we have easy access to our water meter out near the road so first things first, check it out.  Spinning like crazy.   A quick walk through the house determined that the leak must be outside, that much water would be showing by now if it was inside (a wall or ceiling would have caved by now).

Left to my own devices I would of called somebody in to find the leak but my husband is a DIY'er to the extreme.  If he can do it at all, he will.  So, the search began.

I gotta say, my husband is such a smarty pants.  He walked the water line from the meter at the road to the house (we dug it and put it in when we built the house so he knew right where it was at) and found no evidence of a leak, no marshy areas or puddles.  Next, he circled the house and noticed the drainage tile around the foundation was shedding water.  We haven't had any rain so where would that water be coming from?  Like I said, he's so smart.

Thursday was the first day of the 2nd Shotgun Deer Season here in Illinois and he had planned to leave early for a hunting weekend with his dad and brother.  Instead, when I woke up he was outside with his headlamp on digging a hole to find the leak along the foundation of the house (where the water enters). 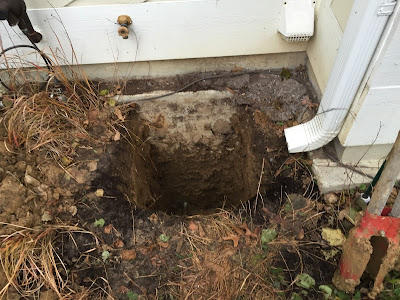 "Did he find the leak" you ask?  Well of course he did!  A plumber friend from church came and helped him replace the copper line and voila' all fixed.  Poor guy was so sore and tired he ended up missing his first day of hunting.

I don't know about you but when unexpected challenges show up, especially when I've got plans that I'm excited about, that can throw me into a little bit of a tizzy at first.  It takes me a little while to come to terms and accept my new reality and get to work in my new set of circumstances (I always get there, eventually).

That hubby of mine is a rock.  So solid and steady, if it fazes him he hides it pretty well.  He simply attacks the problem, fixes it if he can, then continues on his way.  No drama, no reality check or time needed to come to terms, just action!  I wish I was more like that.

How do you handle adversity?  Do you fly off the handle or take things in stride?  Are you a problem solver or more of a problem creator?  Have you found yourself handling things better when things go awry as you've gotten older or worse?  It's really an amazing thing to see how differently people handle life's problems and unexpected challenges on a daily basis and pretty darn humbling as well.

Posted by thechirpingfrog at 6:00 AM